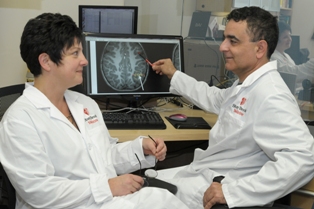 Drs. Helene Benveniste and Zvi Jacob discovered that children’s brains are more affected by an inhaled anesthetic than an intravenous anesthetic with increased levels of lactate in the parietal cortex.

STONY BROOK, N.Y., October 26, 2012 – Stony Brook University School of Medicine researchers have found that children’s brains are more affected by an inhaled anesthetic than an intravenous anesthetic with increased levels of brain lactate. Lactate increases brain activation and may lead to metabolic changes associated with anxiety and delirium. Reported in the November issue of Anesthesiology, the findings provide new clues to metabolic changes within the brains of children undergoing anesthesia and could help researchers understand why general anesthesia may be potentially harmful to the developing brain.

In “Metabolomic Profiling of Children’s Brains Undergoing General Anesthesia with Sevoflurane and Propofol,” 59 children ages two-to-seven years old were administered one of two routinely used anesthetics for an MRI procedure. One group received sevoflurane (inhaled) and the other received propofol (intravenous). The parietal cortex of the children’s brains was imaged one hour after being administered anesthesia.

The Stony Brook team, led by Zvi Jacob, MD, and Helene Benveniste, MD, PhD, mapped the metabolic patterns of the children’s brains by using non-invasive proton magnetic resonance spectroscopy (HMRS), an imaging method that tracks metabolic processes and defines chemical fingerprints that cellular processes leave behind. The imaging revealed that approximately twice the amount of lactate and 20 percent more glucose were present in the parietal cortex of sevoflurane-anesthetized children compared to propofol-anesthetized children.

“Lactate increases when the brain is activated, and therefore the higher level of lactate in the brain of a child administered sevoflurane compared to propofol is likely the result, in part, of more neuronal firing during the unconscious state, which means more activity in the brain,” said Dr. Benveniste, Professor of Anesthesiology and Radiology, and Vice Chair for Research, Department of Anesthesiology. “This activity resulting in lactate ‘flooding’ in the setting of anesthesia may be disadvantageous and increase the chance of children becoming anxious and/or delirious during emergence from anesthesia or in the immediate post-operative period.”

The research team documented that children who emerged from anesthesia with more agitation and dissociative behavior also had the highest levels of brain lactate. During emergence from anesthesia, each child was assessed for emergence delirium by a recovery room nurse using the Pediatric Anesthesia Emergence Delirium Scale (PAED). The PAED score was significantly higher in the children anesthetized with sevoflurane compared to propofol.

Additionally, the children who emerged with more agitation and cognitive disassociation – regardless of the anesthetic form used – had a higher PAED score and higher lactate and glucose concentrations, but lower concentrations of creatine, in the brain.

“It is important to point out that the results do not suggest that either of the anesthetics cause long-term effects,” emphasized Dr. Benveniste.

The children involved in the study did not differ in age, weight or gender between the two groups. Children with acute brain trauma and other conditions that increased intracranial pressure were excluded from the study. All were anesthetized for MRI procedures only, and therefore post-surgical pain did not contribute to the mental or emotional status of patients.

All children recovered without complications from the anesthesia. The recovery time was shorter with propofol compared to sevoflurane.

The Stony Brook research team used prior knowledge of simulated spectral signatures of brain metabolites to access the data. Numerous metabolites were measured, including lactate, glucose, creatine, glutamine, and lipids.

The study results also translated and validated previous findings by the research team.  In a rodent model, they found that inhaled anesthesia led to lactate and glucose brain levels two times higher than anesthetization with propofol.

Dr. Benveniste said that the research team will expand its studies by including younger children and increasing the overall numbers in order to investigate if the findings are age-dependent.