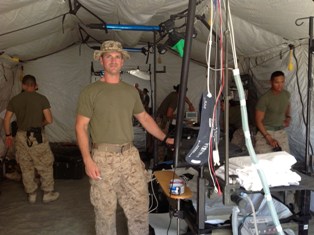 STONY BROOK, NY, September 19, 2013 – For Gregory Mallo, MD, Stony Book Medicine has prepared him for his career as an orthopaedic surgeon – not once, but twice, with a tour of duty in Afghanistan in between. Once he completes his military service, he will be off to Harvard for a combined shoulder and elbow fellowship program next year at Massachusetts General Hospital.

A native of New City, NY, Dr. Mallo’s first stint at Stony Brook occurred the conventional way: through an internship in general surgery and a residency in orthopaedic surgery from 2005 to 2010, including one year as Chief Resident. The second stint was far less ordinary: following his return from active duty as a naval surgeon in Afghanistan.


Ever the perfectionist, Dr. Mallo wanted to make sure his skills were as up-to-date as possible before returning to his normal arthroscopy and cartilage restoration practice, in which he typically treats active-duty Navy, Marine and Special Forces personnel. For help, he turned to two of his mentors at Stony Brook: James Penna, MD, the Orthopaedics Residency Director, and Lawrence Hurst, MD, Chair of the Department of Orthopaedics and Chief of the Division of Hand Surgery. They readily agreed to allow Dr. Mallo to observe cases, participate in Grand Rounds and generally get reacquainted with civilian medicine.

For both Dr. Mallo and Stony Brook, it was a win-win situation. He was able to gently return to the rhythms of civilian medicine — markedly different from the makeshift, often brutal, conditions of a war zone — and Stony Brook physicians and residents benefitted from the perspective he brought from his wartime experiences.

“Dr. Mallo’s experiences and skills are of great value to our residents,” said Dr. Hurst. “He was able to give us an eye-opening look into the world of military medicine that we rarely see. This brings about a great cross-fertilization of ideas to new and seasoned physicians alike, especially trauma. Also, as residents look to the future for fellowships and career decisions, alumni like Dr. Mallo can offer a fresh perspective and serve as a role model.”

Of course, being a role model was the last thing on Dr. Mallo’s mind when he came home. His first priority was to be at the side of his wife, Kimberly O’Shea Mallo, as she delivered their first child, Drew Gregory, a mere month after landing on U.S. soil. “That was the sweetest homecoming of all,” he said of joining with his in-laws for the special occasion at their home in East Setauket.

It also marked the beginning of the next stage of his career. Recently, Dr. Mallo returned to his practice at Camp Lejeune in North Carolina, where he was first stationed, to complete his final months of service before beginning a combined shoulder and elbow fellowship program at Harvard in August 2014.

Dr. Mallo’s journey from Stony Brook to Afghanistan and back started when he signed up for a program with the United States Navy that paid for medical school, which he completed at Jefferson Medical College in Philadelphia, PA. But because of the war, the military orthopaedic residency program that physicians such as him typically go into after medical school was at capacity. He was deferred, instead, to Stony Brook.

“I jumped at the opportunity because Stony Brook has such solid orthopaedic and trauma programs — trauma being the backbone of orthopaedic work — and also because I’m from Long Island and my wife’s family lives in Setauket,” he said.

He then was stationed at Camp Lejeune Naval Hospital in North Carolina, where he established a sports medicine practice before receiving orders in November 2012 to deploy with a US Marine Corps Combat Logistic Company to the Southern Helmand province of Afghanistan, north of the Pakistani border.

Dr. Mallo praised his mentors, including James Nicholson, MD, MHS, Director of the Joint Replacement Center at Stony Brook Orthopedic Associates, and James M. Paci, MD, a sports medicine specialist with the practice, who were influential and instructive during his residency and his homecoming. He had nothing but praise for the way Stony Brook welcomed him back with, as he says, “with open arms.”  Dr. Hurst says it was only natural to do so.

“We support our alumni for the long-term in whatever way we can, from fellowship training to job connections,” Dr. Hurst said. “But what Dr. Mallo did was a big deal. He went into active duty and served his country admirably. Helping him reintegrate into the medical mainstream was a natural extension of this and, more important, the right thing to do.”