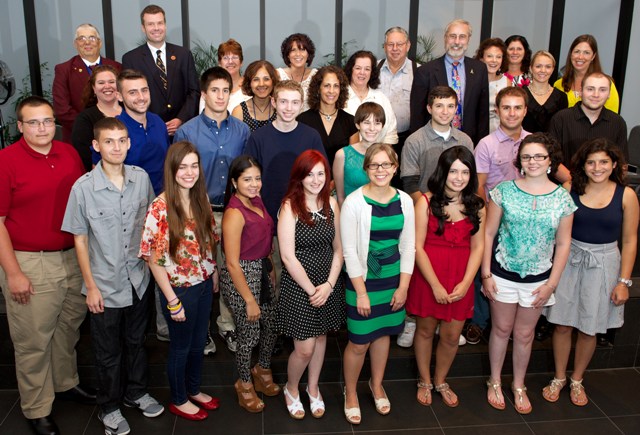 STONY BROOK, N.Y., August 21, 2013 – Alexandra Solowinska is grateful to the Stony Brook University Cancer Center for helping her fight to overcome her cancer. Now she is benefiting from a scholarship award that will help her pursue her dream of becoming a doctor at Stony Brook University School of Medicine.


Solowinska, 18, daughter of Elizabeth and Arkadiusz Solowinska of Mattituck, is one of 24 pediatric oncology patients who received the Daniel Brooks Memorial Educational Awards, which were presented in a ceremony hosted on Aug. 9 by the Division of Pediatric Hematology/Oncology at Stony Brook Children’s Hospital. A graduate of Mattituck-Cutchogue Junior/Senior High School, she will attend Stony Brook University in the fall.

Solowinska addressed the audience to express her gratitude, not only for the award, but for everything the Cancer Center has done for her.

“Despite having to receive chemotherapy here, I consider Stony Brook my home, and the doctors and nurses part of my family,” she said.

The Daniel Brooks Memorial Education awards are given each year to students who have been treated for cancer at Stony Brook Cancer Center to help fund their education at a college or trade school. Established in 2003, the awards are supported through the Sunrise Fund, which was created in 1999 to raise awareness and funds for Pediatric Hematology/Oncology programs at Stony Brook Children’s. Since its inception, the awards have totaled $180,000 in support for students.

The awards were established in memory of Daniel Brooks of Port Jefferson, who was treated for leukemia at the Cancer Center as a teenager in the 1990s. Following his treatment, Brooks obtained a degree in special education. Since he could empathize with children undergoing treatment and perhaps inspire them, Brooks returned to the Cancer Center to develop a program of hope for them.

Working with the healthcare professionals at Stony Brook, he offered his unique perspective as a survivor who had faced the challenges of returning to school. He also provided his perspective as a teacher to help develop Stony Brook’s School Re-entry Program, which helps children undergoing treatment for cancer to return to school when medically cleared. Brooks lost his life in 2002 in a motor vehicle accident.

“This is the eleventh year we have given scholarships to our current and former patients who are cancer survivors who are furthering their education,” said Debra Giugliano, RN, MS, Nurse Practitioner in Pediatric Hematology/Oncology. “Dan’s input was invaluable to our current program. It’s fitting that this award is named for Dan, whose spirit and dedication to education and children with cancer endure through this award program.”


At the awards ceremony, Robert Parker, MD, FAAP, Director of the Pediatric Hematology/Oncology program, presented certificates to attendees as their families and friends looked on. A reception followed the presentation in the Charles B. Wang Center on the Stony Brook University campus.

About the Sunrise Fund:

The Sunrise Fund was founded in 1999 by Susan Shiebler and Maureen Brennan, whose children were treated for cancer at Stony Brook University Hospital. The fund was established to increase awareness about childhood cancer and to raise funds for specific projects including a respite center, a playroom, extended support services, facilities and programs that meet our families’ growing needs, and vital research into the causes and treatment of childhood cancers.  The Sunrise Fund helps sustain the Outpatient Pediatric Hematology and Oncology program of Stony Brook Children’s Hospital, the only pediatric oncology program on Long Island tied directly to a major research university. To learn more, visit www.hsc.stonybrook.edu/sunrisefund.