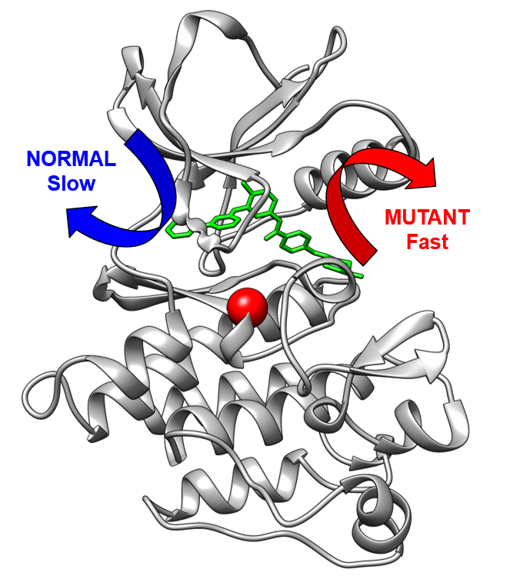 STONY BROOK, NY, June 21, 2022 – Understanding why and how chemotherapy resistance occurs is a major step toward optimizing treatments for cancer. A team of scientists including Markus Seeliger, PhD, of the Stony Brook Cancer Center and Renaissance School of Medicine at Stony Brook University, believe they have found a new process through which drug resistance happens. They are using a computer simulation model that is helping them understand exactly how molecules interact with the cancer drug Imatinib (known as Gleevec) in the chemotherapy resistant process. Imatinib treats chronic myeloid leukemia (CML) highly effectively, yet many late stage patients experience drug resistance which renders the drug minimally effective at that stage.

“This method in itself is a major technical achievement that extends computational abilities for drug resistance research, and importantly led to us being able to predict how rapidly healthy and mutant proteins would release this drug,” says Seeliger, Associate Professor in the Department of Pharmacological Sciences. “For the first time, we could see the release of a drug from a protein in such detail and accuracy. Moreover, we could show that the mutation changes fundamentally within the exit route of the drug from the protein.

The groundwork for the mutation testing via the computational method was outlined in the PNAS paper. Seeliger and colleagues tested how imatinib binds to mutations in patients with imatinib-resistant CML. They found that the majority of mutations readily bind to imatinib, so that posed the question just how do these mutations cause resistance in patients? The researchers then identified several mutants which bound imatinib readily but they release the drug much faster.

After identifying these mutants with a faster drug release, the team used nuclear magnetic resonance (NMR) and molecular dynamics to link the protein to drug disassociation – underlying the importance of drug disassociation kinetics for drug efficacy. This enabled them to identity a novel mechanism of imatinib resistance.