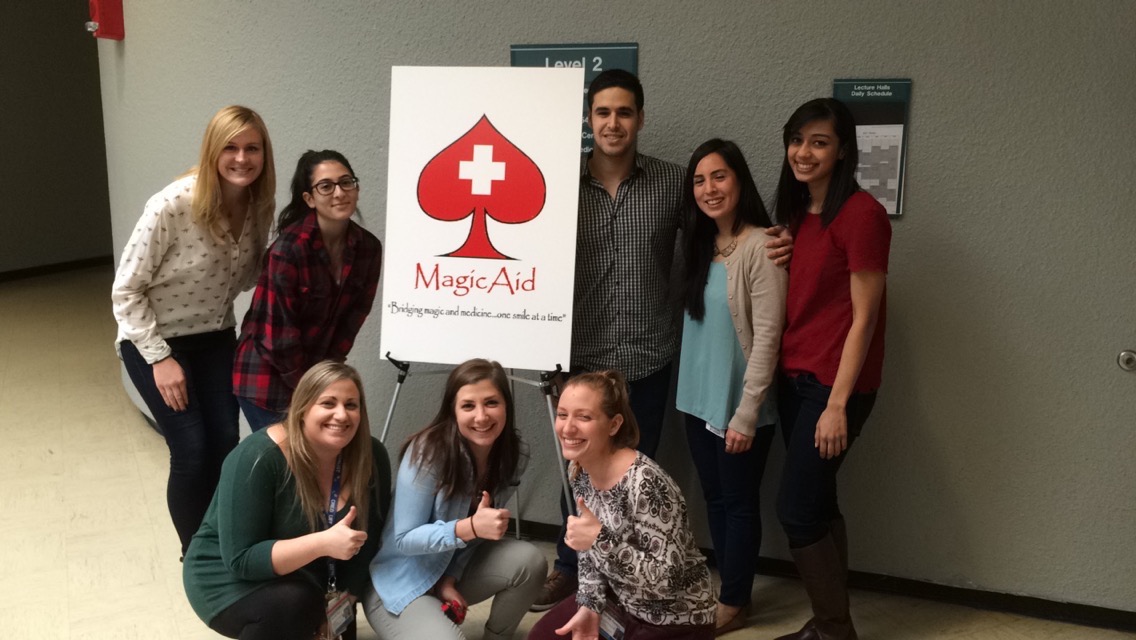 
Stony Brook, NY, February 13, 2017 —
Stony Brook University School of Medicine student David Elkin is not your typical third-year medical student.  In addition to studying to become a doctor, he spends his spare time spreading magic around the hallways of Stony Brook Children’s Hospital.

Nearly 10 years ago, while still in high school, Elkin founded

, a program with the mission of relieving patients from some of their health worries by showing them and teaching them magic. The 27-year-old California native brought the program to Stony Brook Children’s Hospital, where he serves as the “resident magician” and performs for kids and their families.

“Magic can make the impossible to become possible,” says Elkin. “Providing magic therapy to children helps suspend their disbelief, and provides them with hope. Magic can help them believe that they can get through whatever medical challenge they are going through at the time.”

And with a trick or two up his sleeve,
Elkin not only performs magic as a medicine but teaches
his magic to any child who wants to learn, leaving some of magic behind.

“By teaching them magic, it give the kids some control in an environment they usually have no control in,” Elkin

Weekly, or when his rotation schedule permits, David volunteers his time and can be found on the Pediatric units of the hospital, providing magic therapy and putting huge smiles on Stony Brook’s youngest patients.

,  “We were delighted to add a medical student who is also a magician to our bag of tricks. Pun intended.”

Recently, David has enlisted several fellow medical students to follow in his footsteps. MagicAid has taken off, and now there are nearly 50 “magic therapists” working with Stony Brook Children’s Hospital.

David started magic at a young age by hustling people at cards and Three-Card Monte. He made his lunch money manipulating card games on the school bus and during nutrition in middle school and early high school.

When he was 14, he auditioned for and was accepted to the Academy of Magical Arts Junior program, which has produced some of the greatest magicians of our time. David performed alongside many magicians who are well-known in the magic community.

David performed for many private parties, fundraisers, and at the world-famous Magic Castle in Hollywood for its many celebrities and guests. He was also a regular performer at events for the Somaly Mam Foundation, a charity dedicated to saving and rehabilitating women who were sold into slavery.

In high school, he founded MagicAid. He performed at the hospital every Friday night, ultimately for over 900 kids and adults. He was lucky enough to be featured on ABC Channel 7 News for his work with MagicAid.

At the ripe age of 20, David retired from performing magic and now teaches and consults. He has consulted for magicians’ appearances on the stage as well as on TV shows.

He also was invited by The Magic Castle’s president, Neil Patrick Harris, to join his committee at the castle to share his many ideas on how to improve The Magic Castle Clubhouse. He has been an active member on the committee since 2012 and leads teams in designing and implementing new features, gags, and illusions for the clubhouse.

With 106 beds, Stony Brook Children’s Hospital is Suffolk County’s only children’s hospital. More than 8,000 children and young adults are discharged each year. Stony Brook Children’s has more than 160 pediatric specialists in over 30 specialties. The hospital is Suffolk County’s only Level 4 Regional Perinatal Center and has a Level 3 Neonatal Intensive Care Unit. It is home to the nation’s first Pediatric Multiple Sclerosis Center and also offers a Pediatric Hematology/Oncology Program, Pediatric Cardiology Program, Pediatric HIV and AIDS Center, and Cystic Fibrosis Center. To learn more, visit