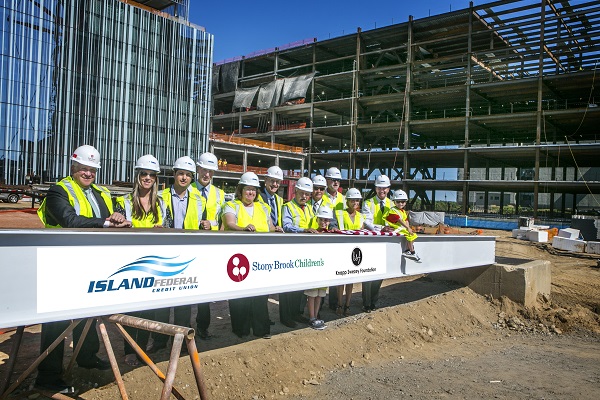 $5 million expected to be raised by Challenge, which will complete the Building Fund’s $25 million goal

Stony Brook, NY, July 28, 2015 – At the “Topping Off” Ceremony for Stony Brook Children’s Hospital, cheers were heard as a crane installed the final beam needed to complete the frame of the major building project on the Stony Brook Medicine campus. The event marked a major milestone for the project and also served as a launching point for the Knapp Swezey Foundation Children’s Challenge, a $2.5 million matching challenge pledge designed to raise the $5 million needed to complete the $25 million Children’s Hospital Building fund philanthropic goal. The Knapp Swezey Foundation has pledged a dollar-for-dollar match on all private donations and public funding received between July 1, 2015 and June 30, 2016. Before the ceremony, the final beam was signed by patients, families, donors, elected representatives and Stony Brook Medicine leadership.

“Stony Brook Medicine has been such an important resource for the health and wellness of the Long Island community for so long,” said Foundation Board Member David Knapp. “We hope this matching challenge pledge will create even more awareness and support from the community to ensure the children of Suffolk County receive the very best care available.”

“We are grateful to the Knapp Swezey Foundation for their generosity across campus over the years,” said Stony Brook University President Samuel L. Stanley Jr., MD. “The Knapp Swezey Children’s Challenge is an incredible example of their confidence in Stony Brook’s mission and how philanthropy provides the margin of excellence in all we do. It will also help position Stony Brook Children’s as a leader in pediatric care and a model children’s hospital of the future.”

“We want everyone interested in supporting Stony Brook Children’s to know that donations made through June 30, 2016 to the Stony Brook Children’s Hospital Building will be matched by the Knapp Swezey Foundation – doubling the impact of their gift,” said Kenneth Kaushansky, MD, MACP, Senior Vice President for the Health Sciences and Dean of Stony Brook University School of Medicine. “The Knapp Swezey Foundation has been a great friend, and we are thankful for this generous pledge.”

“This hospital will help a great number of children and families in our region. Congratulations to everyone who has worked throughout the year to construct this state-of-the-art facility,” said Senator Flanagan. “This effort was a great partnership of state funding and private donations, and we are very appreciative of all who joined together for the good of our community, including the Knapp Swezey Foundation and Island Federal Credit Union.”

“This project is one of my most cherished accomplishments in that it will benefit the lives of Suffolk County children and families for years to come,” said Senator LaValle. “Today we celebrate a major milestone and recognize all those who have contributed, from the financial donors to the pediatricians and doctors to labor and their workers who are making this dream a reality.”

“The Knapp Swezey Foundation’s dedication to ensuring that Stony Brook Children’s is able to provide Long Island families with the best possible care, has been tremendously encouraging,” said L. Reuven Pasternak, MD, Chief Executive Officer and Vice President for Health Systems, Stony Brook University Hospital. “We are grateful for the momentum this matching challenge has infused into this project, particularly at this pivotal time when the next phase of construction is beginning.”

Also acknowledged at the Topping Off ceremony was Island Federal Credit Union (Island) for its $750,000 gift to the new Children’s Hospital building fund earlier in the year, as part of its $7 million, 10-year partnership with Stony Brook University.

Bret Sears, CEO and President of Island applauded the Knapp Swezey Foundation’s commitment and expects it will build on the groundswell of support for the new Children’s Hospital. “Island Federal Credit Union is proud to partner with Long Island’s businesses, nonprofits, and community members to support Stony Brook and bring the very best pediatric facilities, doctors, and clinical care to Suffolk County families,” he said.

The Knapp Swezey Foundation, together with their friends and family, have been dedicated supporters of Stony Brook Children’s since 2010 with a total impact of $14.4 million, including the new matching challenge pledge. Most recently, in September 2014, the Foundation gave a $2.7 million gift, which enabled Stony Brook Children’s to complete a $9 million matching challenge for the new building from an anonymous donor.

“The generous support of the Knapp Swezey Foundation is helping to make Stony Brook Children’s a reality,” said Margaret M. McGovern, MD, PhD, Physician-in-Chief, Stony Brook Children’s Hospital, and Professor and Chair, Department of Pediatrics, Stony Brook University School of Medicine. “The new Stony Brook Children’s hospital is an important addition to Stony Brook Medicine; it will provide all private rooms to allow parents to comfortably stay with their children, and lots of play space and respite areas for families. The new facility will also support cutting edge clinical programs and allow us to recruit and retain the best pediatric doctors in the country and expand the research frontier toward developing groundbreaking therapies for the cure of childhood disease and disability.”

The new Stony Brook Children’s is part of a major expansion project currently underway that will allow Stony Brook Medicine to grow with the changing needs of families throughout Suffolk County and beyond. It will be located within the 10-level University Hospital Pavilion, which is part of a 465,000 square foot development that also includes a state-of-the-art research and clinical care facility, the Medical and Research Translation building. The new facilities are being built adjacent to Stony Brook University Hospital.

The philanthropic goal for the new Children’s Hospital is $25 million, of which more than $20 million has already been raised. To donate and double the value of your gift with the Knapp Swezey Children’s Challenge, please visit stonybrook.edu/childrenschallenge.

For more about the Knapp Swezey Children’s Challenge, click on this video.

With 106 beds, Stony Brook Children’s Hospital is Suffolk County’s only children’s hospital. More than 8,000 children and young adults are discharged each year. Stony Brook Children’s has more than 160 pediatric specialists in over 30 specialties. The hospital is Suffolk County’s only Level 4 Regional Perinatal Center and has a Level 3 Neonatal Intensive Care Unit, the highest designations possible from the New York State Department of Health. It is home to the nation’s first Pediatric Multiple Sclerosis Center and also offers a Pediatric Hematology/Oncology Program, Pediatric Cardiology Program, Pediatric HIV and AIDS Center, and Cystic Fibrosis Center. To learn more, visit stonybrookchildrens.org

STONY BROOK, NY, April 13, 2020 — The Emergency Department at Stony Brook University Hospital saw its first patient with suspected Covid-19 on February 7, 2020. Since then, the hospital has seen more than 3,500...

STONY BROOK, NY, August 6, 2019 — Peter van Nieuwenhuizen, distinguished professor of physics in the College of Arts and Sciences Department of Physics and the C.N. Yang Institute for Theoretical Physics at Stony Brook...

Tune In: Beyond the Expected Podcast: Coming Back Safe and Strong: Pursuing a Cure