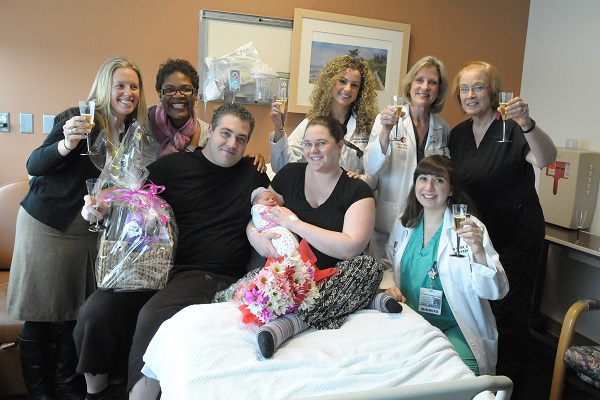 IT’S A GIRL! The Midwifery Practice at Stony Brook Celebrate their 10,000th Birth

STONY BROOK, NY, FEBRUARY 13, 2015 – The Midwifery Practice at Stony Brook celebrated their 10,000th birth yesterday. The Midwives created a countdown on social media and were anticipating this birth for a few weeks! With three women admitted into the Labor and Delivery Unit at Stony Brook University Hospital on Wednesday night, the race was on to see which baby would be “crowned” number 10,000th!

At 1:33am, on Thursday, February 12, little Lorilei Ann came into the world and not only was greeted by the team of very excited midwives, but mom and dad, Phyllis and Joseph Boccio, both of Centereach, who were surprised to learn they were welcoming another little girl into their home. Big sister Adelyn was not present for the big day, but will hopefully be excited to meet her little sister.

The festivities include the midwives presenting a ‘goodie basket’ for the family which will include bibs, onesies, and other baby supplies; cake, sparkling cider in champagne flutes, flowers, a gift certificate and infant photography session – making this day extra special for the family.

For generations, midwives have cared for women during pregnancy, childbirth and the early postpartum period. Their holistic focus recognizes the needs of women and those important to them. Midwives care for clients, educate other health care professionals and work together with physicians as valued members of the health care team.