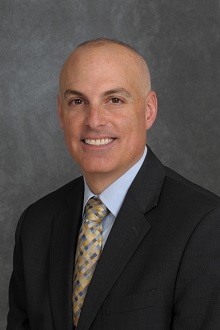 STONY BROOK, N.Y., December 8, 2014 – Joseph Lamantia, an experienced healthcare executive with extensive knowledge of administrative processes and financial operations, has been named Chief of Operations for Population Health at Stony Brook Medicine, announced Kenneth Kaushansky, MD, Senior Vice President of the Health Sciences and Dean of the School of Medicine.

“I can think of no one better suited than Joseph Lamantia to advance Stony Brook Medicine’s role as a national leader in the area of population health management,” said Dr. Kaushansky. “He is a highly accomplished healthcare executive who has had great success in leading organizations through change, growth, and improved performance.”

Mr. Lamantia comes to Stony Brook from South Nassau Communities Hospital, where he served as Executive Vice President and Chief Operating Officer of the 435-bed hospital for approximately seven years. While there, his operational leadership included strategic planning, quality management, and direction for programmatic growth. Mr. Lamantia will apply these skills to the development of individual, organizational, and cultural interventions geared towards improving the morbidity and the healthcare utilization of defined populations served by Stony Brook Medicine.

His experience will also greatly contribute to Stony Brook Medicine’s leadership of the implementation of the New York State Medicaid Redesign program for Suffolk County. The goal of this $8 billion, five-year program is to increase access, enhance quality and patient satisfaction, and reduce the cost of healthcare for New York’s Medicaid patients. Additionally, his oversight will include Stony Brook’s Medicine’s goal to achieve the status of an Accountable Care Organization, a health care environment that would ensure delivery of effective preventive primary healthcare to all citizens of Suffolk County.

Prior to his position at South Nassau Communities Hospital, Mr. Lamantia worked for the North Shore Long Island Jewish Health System for approximately 16 years in multiple capacities, including serving as Executive Director of Franklin Hospital and Associate Executive Director of Finance for Plainview Hospital. Additionally, he spent two years as a manager for Ernst & Young’s national healthcare consulting practice.