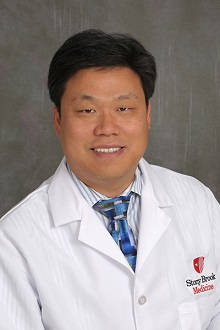 “With his background in the three pillars of an academic medical center: clinical care, education, and research, Dr. Choi is uniquely suited to fill these new positions at the Cancer Center,” said Dr. Hannun. “His extensive background intranslational research that can be applied in a clinical setting, and his expertise in complex gastrointestinal cancers will help us achieve the next level of excellence in both the study and practice of cancer medicine.”

“My goal as Director of Outpatient Medical Oncology is to continue to improve patient care accessibility, increase patient satisfaction, and optimize internal communications,” said Dr. Choi. “As a Director of Gastrointestinal Medical Oncology, we will incorporate translational research to develop improved treatments that are tailored to individual patients.”

Dr. Choi has led clinical trials for treatment of gastrointestinal cancers, particularly involving some of the newer classes of chemotherapy medications. During the past seven years at Wayne State University, he has received grant funding from companies such as Merck, Abbott Laboratories, Genetech and Adventrix to advance clinical trials for colorectal, liver and pancreatic cancers. At Stony Brook, he will lead new clinical trials of targeted therapies for thee forms of cancer and other types.

At Wayne State University, Dr. Choi was Assistant Professor of Medicine and Oncology at the Barbara Ann Karmanos Cancer Institute. In addition to his teaching and mentoring responsibilities at the institute, he also served as Director of Gastrointestinal Cancer Research while there.

He is board certified in both medical oncology and hematology.