Stony Brook Children’s Hospital Project is Well on its Way: Building a Foundation for Children’s Healthcare on Long Island through Private Donations and Public Support 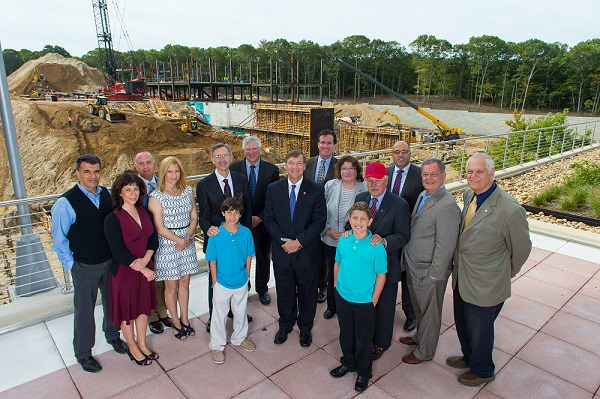 Stony Brook Children’s Hospital Project is Well on its Way: Building a Foundation for Children’s Healthcare on Long Island through Private Donations and Public Support

STONY BROOK, NY, September 26, 2014 – Stony Brook University showcased the construction progress of its new Stony Brook Children’s Hospital facility during a ceremony on Wednesday where President Samuel L. Stanley Jr., M.D., was joined by public officials, generous donors, young patients and their families, and hundreds of administrators, physicians and staff. The new facility, which will have 100 beds and occupy two stories of a new 10-story Hospital Pavilion, is slated to open in 2016.

President Stanley expressed gratitude to Sen. Kenneth P. LaValle and Sen. John Flanagan for securing more than $50 million for an expansion project that will help construct the medical and research translation (MART) building and the new Hospital Pavilion. The combined $425M project is the largest capital construction project within the State University of New York (SUNY) system in the past two decades. President Stanley also announced that the new Children’s Hospital has now received nearly $20 million in philanthropic contributions from hundreds of community members and businesses. This total includes a $9 million matching challenge grant from an anonymous donor, which was met recently when the Knapp Swezey Foundation pledged $2.7 million toward Stony Brook Children’s Hospital.

“Our children – and our children’s children – owe a debt of gratitude to you for making this day a reality,” he said.

Sen. Flanagan added, “The expansion of Children’s Hospital continues to solidify Stony Brook as a premiere teaching hospital, delivering the highest quality of medical care from some of the best doctors and medical staff in the world.”

Additionally, the expanded facility is expected to help recruit and retain the best pediatric doctors in the country and expand the research frontier toward developing groundbreaking therapies for the cure of childhood disease and disability.

“An essential mission of Stony Brook Children’s is to train the next generation of doctors and to push back the frontiers of translational medical research,” said Kenneth Kaushansky, M.D., Stony Brook University School of Medicine Dean and Sr. Vice President for Health Sciences. “This expansion will advance the training of pediatricians and pediatric specialists and pediatric researchers for Suffolk County, for Long Island and beyond.”

More than 8,500 infants, children and young adults are admitted each year to Stony Brook Children’s Hospital, which in its existing facility operates 106 pediatric beds and has more than 200 full-time and voluntary pediatric physicians and surgeons in 33 different specialties.

“It’s a comprehensive approach that addresses the unique physical, emotional and developmental needs of children, from infancy through young adulthood … from the Ronald McDonald Family Room, to Wi-Fi enabled classrooms to help kids keep up with their schoolwork, to LED wall lights that allow children to customize the look of their rooms,” she added.

The 225,000 square-foot Hospital Pavilion and the 240,000 square-foot MART Building are being constructed adjacent to Stony Brook University Hospital on the Stony Brook Medicine campus. A $50 million commitment from Jim and Marilyn Simons enabled Stony Brook University to qualify for a $35 million NYSUNY 2020 Challenge Grant, making construction of the MART possible. The Hospital Pavilion and the MART will bring some 4,200 project-related and specialized research jobs to the region.

Click Here to watch Video of “Kids are Not Little Adults”