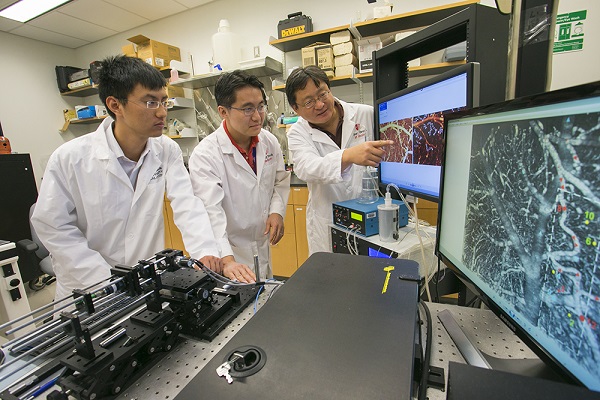 STONY BROOK, N.Y., September 15, 2014 – One thing leads to another, especially in research. When Stony Brook University School of Medicine scientists developed a new method to measure how cocaine disrupts blood flow in the brains of mice, doctors and researchers got a way to form a clearer picture of how drug abuse affects the brain. But the quantitative imaging technique can also be applied to other disease diagnoses and treatments as well, including cancer.

Department of Biomedical Engineering Professor Yingtian Pan, PhD, and his team published their findings in The Optical Society’s (OSA) open-access journal Biomedical Optics Express. The paper,
Optical coherence Doppler tomography for quantitative cerebral blood flow imaging
, describes a technique that focuses a Ti:Sapphire laser on the mouse brain cortex and collects and analyzes the reflected light. These findings are also highlighted in the current issue of
Neuroscience News
.

“Using ultrahigh-resolution optical coherence Doppler tomography, developed in our lab via advances in hardware and image processing, we can show neurovascular toxicity elicited by cocaine,” says Pan. “We can visualize, in animal models, the micro and regional ischemic effects [deficiency of blood flow] to the cerebral microvascular networks.”

What’s critical is the ability to measure both cerebral blood flow speeds inside tiny blood vessels and the larger network effects. “We show that quantitative flow imaging can provide a lot of useful physiological and functional information that we haven’t had access to before,” Dr. Pan says.

The researcher explains that other techniques fall short in determining which terminal vessels start to shut down—“likely originating in arterioles that supply oxygen to neuron, glia, and other cells in the brain”—and where the effects begin to cascade. His team’s unique method has both the resolution and sensitivity to track these events.

“Techniques like two-photon excitation imaging can image individual capillaries but with a small field of view, likely missing the events,” he says. “Other techniques, like fMRI, have a larger field of view, but insufficient resolution to capture the episode until it spreads and becomes more severe.”

The new platform can aid with disease prognosis and monitoring treatment effects. It can also be applied to other diseases involving vascular impairment and healing; to other drug and even alcohol abuse; and in wound repair, especially the formation of blood vessels in tumor tissue.

The cancer “microenvironment” is a promising area. “This technique, unlike previously reported methods that imaged tumor vasculature [the blood vessels, or arrangement of blood vessels, in an organ or part], allows you to image slow capillary flow rates and distribution,” Pan says. “This is more relevant to tissue/cancer physiology and function due to the fact that flow, rather than vasculature, is directly linked to blood supply and oxygen delivery.”

Dr. Pan is Principal Investigator in the study. He worked with PhD student Jiang You, who performed in vivo imaging, and Ki Park (MSc), who handled animal treatments and physiology. The interdisciplinary work was conducted in Dr. Pan’s lab for optical coherence Doppler tomography and in the lab of Department of Biomedical Engineering Associate Professor and Scientist Dr. Congdu Du; her lab develops advanced optical instrumentation to detect and characterize the physiological processes in living biological systems like the brain and heart.

The patent-pending work was funded by the National Institutes of Health through separate grants of $389,000 and $2.14 million. Pan has been working in close collaboration with Dr. Nora D. Volkow, MD, Director of the National Institute on Drug Abuse (NIDA) at the NIH; NIDA supports most of the world’s research on the health aspects of drug abuse and addiction.

The cross-functional approach is standard for Dr. Pan. “We have a number of multidisciplinary research initiatives in the Department of Biomedical Engineering, ranging from cardiovascular, musculoskeletal, and neural system studies to the development of biomaterials and novel biomedical imaging techniques,” he says. (details at http://bme.sunysb.edu/research/index.html). “We want to build a strong bio-imaging research team to address biomedical problems from the molecular and subcellular level to the tissue, organ, and entire body level.”

His team is now developing ways to improve the new technique to allow for imaging of transient effects in the neurovascular network. Another paper, appearing in NeuroImage, details an approach, using contrast enhancement, that shows promise for dramatically improving the sensitivity of capillary flow imaging, which he says could have a great impact on brain functional studies. “We are also working on longitudinal studies of chronic cocaine effects on the neurovascular networks, which is crucial in persistent cocaine toxicity and addiction,” he says.

Dr. Pan’s prior area of expertise was in developing cutting-edge imaging techniques for noninvasive early cancer diagnosis. “Collaboration with Drs. Du and Volkow has brought me to brain imaging and addiction studies,” he says. “It is extremely interesting and rewarding work.”