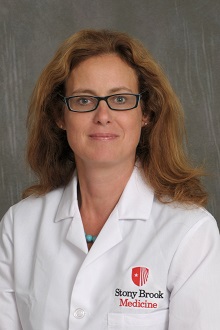 The potential spread of the Ebola virus has grabbed the attention of the world in recent weeks. Dr. Bettina Fries, Chief of the Division of Infectious Diseases, and her colleagues at Stony Brook Medicine, are monitoring the situation and describe what our community should be aware of and the precautionary measures put in place by Stony Brook University Hospital.

The Ebola virus is a highly contagious RNA virus that causes a disease called hemorrhagic fever. Patients first present with fever and other symptoms similar to those seen in influenza. However, these symptoms rapidly progress to the point where a majority of patients die. The virus is transmitted to people from wild animals, and it spreads in the human population through exposure to bodily fluids of infected patients.

The first Ebola outbreaks were described in the mid-1970s, occurring in Sudan and in the Democratic Republic of Congo. Although sporadic outbreaks have occurred in Africa over the past decades, this Ebola outbreak is the largest described to date. Currently, it is limited to four countries in West Africa. The outbreak has predominantly occurred in rural areas except for Nigeria, where cases have been diagnosed in that nation’s capital.

Given that all countries are connected through air travel, we have to be especially vigilant and entertain even the remote possibility that patients with this disease could come to the U.S. Apart from the two U.S. citizens who became infected in Africa, there have not been any Ebola cases within our country.

To protect our community from the unlikely event that we would diagnose a patient with the Ebola virus infection at Stony Brook University Hospital, we have put in place very specific guidelines on how to identify patients at risk for Ebola. If such a patient is identified, we have procedures to follow if they present in our Emergency Department or clinics, which include proper diagnosis and isolation as needed.

At Stony Brook Medicine, these procedures are overseen by Dr. Susan Donelan, the Medical Director of the Healthcare Epidemiology Department. She and her team are well-versed in the New York State Department of Health and Centers for Disease Control guidelines, in order to maximize precautions against Ebola, limit infection risks, and provide optimal patient care if an Ebola case is diagnosed.

The exciting and encouraging news is that researchers have made progress in finding effective treatments for dreadful diseases as Ebola. The experimental treatment given to two American patients infected with the Ebola virus was a cocktail of antibodies that are specific for the Ebola virus. Such antibodies bind to the virus and help the infected patient’s immune cells to clear the virus effectively. This is sort of a modernized “serum therapy.”

Stony Brook Medicine researchers are involved in such investigation, which includes antibody research and other methods with the goal to translate basic research into effective treatments for deadly infectious diseases.

Dr. Bettina Fries is the Chief of the Division of Infectious Diseases at Stony Brook University School of Medicine.

STONY BROOK, NY, February 16, 2021— According to Dental Products Reports, about 60 percent of people have anxiety about going to the dentist. But who can have anxiety when your dentist grooves like this? No one, that’s...