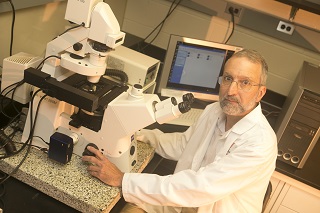 STONY BROOK, N.Y., July 3, 2014 – Patrick Hearing, PhD, Professor of Molecular Genetics and Microbiology, has been selected to become a member of the National Institutes of Health (NIH) Recombinant DNA Advisory Committee, a federal advisory panel that makes recommendations to the NIH Director regarding recombinant DNA research, which is the use of artificial forms of DNA to investigate the causes of many diseases and the development of novel treatments.

Dr. Hearing, a professor at Stony Brook for 30 years, is an educator whose laboratory research centers on the DNA tumor virus Adenovirus, its implications in cancer, and the development of gene therapies for the treatment of disease. He will serve on the NIH Recombinant DNA Advisory Committee, or RAC, for a period of four years, which begins in August 2014 and ends in July 2018.

“I am pleased to join the NIH RAC and contribute to its important activities pertaining to federally funded recombinant DNA research,” said Dr. Hearing. “Human gene therapy has the potential for tremendous impact on the treatment of diseases, and the RAC plays a vital role in advancing clinical trials toward this goal. Additionally, new approaches involving recombinant DNA are being rapidly developed in many areas of medical research that will lead to new clinical practices, and the committee will advise the NIH Director on these approaches.”

“Dr. Hearing is a perfect choice to join the NIH-wide RAC, as he is a world-renowned molecular virologist who has made seminal contributions to the assembly of DNA viruses,” said Jorge Benach, PhD, Distinguished University Professor, Chair of the Department of Molecular Genetics and Microbiology, and Center for Infectious Diseases. “Through his work at Stony Brook with Adenovirus vectors, Dr. Hearing has substantial experience with gene therapy and is on the cutting-edge of new directions in gene therapy approaches.”

The NIH RAC is a panel of some 20 national experts in different fields of science, medicine, genetics, patient care and ethics. The committee reviews many different aspects pertaining to recombinant DNA research, including the current state of knowledge of recombinant DNA technology, reviews of human gene therapy clinical trials, the potential for transfer of genetic material to other organisms, and the ethical, legal and societal issues regarding recombinant DNA.