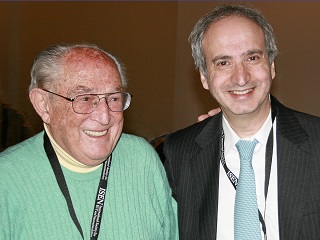 STONY BROOK, N.Y., July 2, 2014 – Max Fink, MD, Professor of Psychiatry and Neurology Emeritus at Stony Brook University School of Medicine, is the recipient of the Lifetime Achievement Award from the International Society for ECT and Neurostimulation (ISEN). Dr. Fink is internationally renowned for his leadership in electroconvulsive therapy, or ECT, and spearheading ECT research and advocacy over the course of his 65-year career.

The ISEN Lifetime Achievement Award is given to a pioneering scientist in the field of psychiatry and to one whose work is considered extraordinary. Dr. Fink received the award at the ISEN 2014 annual meeting. The award was presented to him by ISEN President Georgio Petrides, MD, who studied with Dr. Fink when he practiced as a Psychiatry resident and fellow at Stony Brook.

During the award ceremony, Edward Shorter, PhD, a medical historian from the University of Toronto, and a frequent collaborator with Dr. Fink, cited Dr. Fink’s many career accomplishments that led to his selection as the awardee: His pioneering work on the effectiveness of the new antipsychotic medications in the early 1960s; his breakthrough studies on the effects of antipsychotic drugs; his spirited defense of ECT against waves of attacks in the 1970s, 80s, and beyond; his publication of the first modern manual on the use of ECT in 1979; his founding of the ECT journal Convulsive Therapy in 1984; his publication of  two books, Catatonia and Melancholia; and his success in having catatonia recognized as an independent diagnosis in the field of psychiatry.

Dr. Shorter added that the key to Dr. Fink’s lifetime success is that he “thinks of psychiatry as a scientific field with the same evidentiary requirements and progress through hypothesis-construction that characterizes the rest of medicine.

When Dr. Fink came to Stony Brook 1972, he was emerging as an international leader ECT treatment and research. When Stony Brook University Hospital opened in 1980, Dr. Fink set up the first ECT service. In the Department of Psychiatry, Dr. Fink established the laboratory of pharmaco-electroencephalography. He conducted research in drug treatments and electroencephalograpy, or EEG, which measures and records electrical activity in the brain. This research lead to Dr. Fink and his colleagues to identify EEG profiles in patients for more than 60 compounds, facilitating the introduction of several new psychotrophic medications.

In more recent years, Dr. Fink’s research has centered on psychopathology, the syndromes of catatonia and melancholia.

Dr. Fink received his M.D. from New York University College of Medicine in 1945. He served as a medical officer in the US Army from 1946 to 1947 and is certified as a specialist in neurology (1952), psychoanalysis (1953), and psychiatry (1954). He has held Psychiatry faculty appointments at Washington University, New York Medical College, and Stony Brook.