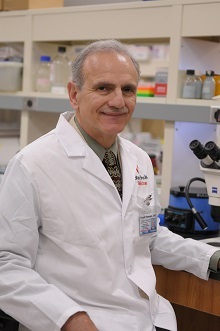 STONY BROOK, N.Y., July 1, 2014 – Stony Brook University Cancer Center Director Yusuf A. Hannun, MD, is among three international luminaries who received an honorary Doctor of Humane Letters from the American University of Beirut. Dr. Hannun was recognized with this honor for his work as an internationally renowned molecular biologist and physician leading the charge against cancer.

A Doctorate of Humane Letters is an honorary degree conferred on those who have distinguished themselves in fields such as science, literature, religion, business or government. Dr. Hannun, also Vice Dean for Cancer Medicine and the Joel Kenny Professor of Medicine at Stony Brook, received his MD degree with distinction from the American University of Beirut in 1981. He received the Doctor of Humane Letters from his alma mater at its 145th commencement.

The University cited Dr. Hannun’s more than 30 years of research devoted to understanding the molecular mechanisms of cancer, and his leadership at many levels in the field of cancer medicine.

Also receiving a Doctor of Humane Letters from the American University of Beirut are Lebanese sculptor and painter Saloua Raouda Choucair, and entrepreneur Samih Darwazah, who founded the global enterprise of Hikma Pharmaceuticals.