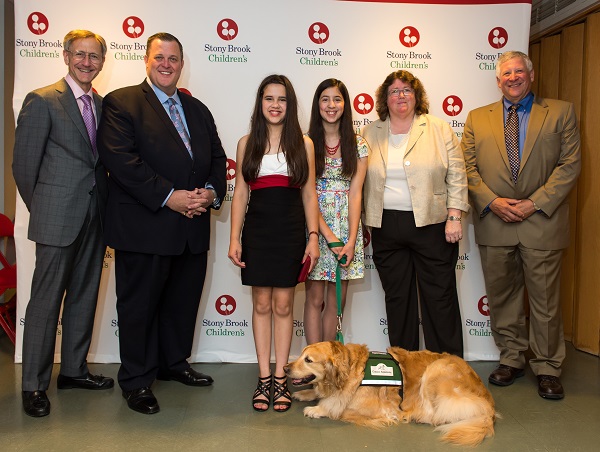 All proceeds from the event, held at the Staller Center for the Arts on the Stony Brook University campus, were matched dollar for dollar by an anonymous donor to benefit the Building Fund for the new Stony Brook Children’s Hospital.

The night began with a welcome and thank you to supporters from Margaret McGovern, MD, PhD, Chair of the Department of Pediatrics and Physician-in-Chief of Stony Brook Children’s Hospital, who spoke about the importance of upgrading and expanding the hospital. Dr. McGovern also introduced one of Stony Brook Children’s patients, who spoke of the excellent care she’s received at the hospital over the years.

Comic veteran Murv Seymour kicked off the comedy portion of the program. Gardell then took the stage to perform his unique brand of stand-up, sharing a range of hilarious stories – from parenting to marriage to America’s latest diet crazes.

“Stand-Up for Kids was a great event for Stony Brook Children’s,” said Dr. McGovern. “Billy Gardell was a fantastic performer. It was a wonderful way to raise awareness and funds for the expansion of Stony Brook Children’s that will help us serve even more children, generate more cutting-edge research, and train more pediatric specialists.”

Established in June 2010, Stony Brook Children’s Hospital is Suffolk County’s only children’s hospital. More than 7,000 children and adolescents are admitted each year. Stony Brook Children’s operates 100 pediatric beds and has more than 140 full-time pediatric physicians and surgeons in 30 different specialties and over 200 voluntary pediatric faculty members. The hospital is the Level 4 Regional Perinatal Center for our area and has a Level 3 Neonatal Intensive Care Unit. It is home to the nation’s first Pediatric Multiple Sclerosis Center and also offers a Pediatric Hematology/Oncology Program, Pediatric Cardiology Program, Pediatric HIV and AIDS Center, Cystic Fibrosis Center and the Cody Center for Autism and Developmental Disabilities. To learn more, visit
www.stonybrookchildrens.org
.