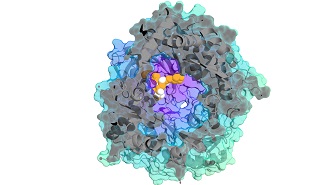 Dr. Markus Seeliger and colleagues report development of an inhibitor for insulin-degrading enzyme in the journal Nature

STONY BROOK, N.Y., June 4, 2014 – The discovery of an inhibitor of the Insulin Degrading Enzyme (IDE), a protein responsible for the susceptibility of diabetes because it destroys insulin in the body, may lead to new treatment approaches for diabetes. In collaboration with the discoverers of the inhibitor, David Liu and Alan Saghatelian, Stony Brook Medicine scientist Markus Seeliger, PhD, and colleagues nationally, demonstrated the efficacy of the compound in a research paper in the early online edition of
Nature
.

More than 20 million people live with type II diabetes in the United States, a disease in which the body cannot make sufficient amounts of the hormone insulin. IDE removes insulin from the blood. To date, diabetes treatment strategies are based on patients either injecting insulin, taking medicine to make their body more sensitive to insulin, or taking other drugs to stimulate insulin secretion. In the paper, “Anti-diabetic action of insulin-degrading enzyme inhibitors mediated by multiple hormones,” the authors reveal results that point to a potential new approach – regulating the degradation of insulin in the blood.

“A strategy to protect the remaining amounts of insulin produced by diabetics in response to blood sugar levels is an attractive treatment alternative, particularly in the early stages of type II diabetes,” said Dr. Seeliger, Assistant Professor in the Department of Pharmacological Sciences at Stony Brook University School of Medicine. “The research results gives proof of concept that targeting this protein is extremely promising. The inhibitor we discovered successfully relieved the symptoms of type II diabetes in obese mice and not only elevated their insulin levels but promoted healthy insulin signaling within the blood.”

Using a robotic structural biology facility at Stony Brook and resources at Brookhaven National Laboratory, Dr. Seeliger and Zach Foda, an MD/PhD candidate and student in Dr. Seeliger’s laboratory, determined the three-dimensional structure of the inhibitor compound and how it is bound to the IDE. The research team used this 3-D structure to help further evaluate the compound’s properties and characteristics.

To see the 3-D structure and its properties, view this video animation.

Dr. Seeliger said that the research findings are important initial steps to developing a drug that diabetics can use to regulate the depletion of insulin in their blood. A realistic initial treatment approach, he added, may be to use the compound to help the body retain insulin levels and thus delay the use of insulin for type II diabetes.

The research was supported in part by the National Institutes of Health’s National Institute of General Medical Sciences, which supports research that lays the foundation for advances in disease diagnosis, treatment and prevention.