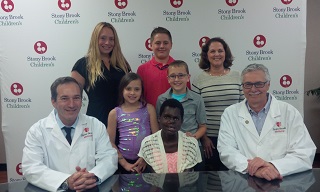 STONY BROOK, NY, June 2, 2013 – After one year in the United States and 10 reconstructive surgeries at Stony Brook Children’s Hospital, Saline Atieno, a 12-year-old Kenyan girl, has returned home this June with a transformed face, a new ability to smile, and a future with promise.

At age 3, Saline was diagnosed with “Noma,” a devastating bacterial necrosis that develops in the mouth and ravages the faces of victims. According to the World Health Organization, some 140,000 new cases of Noma are diagnosed annually in developing countries and affects primarily young children. Noma is called the “face of poverty” because it results from poor water sources, hygiene, and/or malnutrition. Ninety percent of the children who contract Noma die from it.  Somehow Saline managed to survive but was left with a severely deformed face. So disfigured, Saline found eating food became more difficult, and the ability to smile impossible.

Alexander Dagum, MD, Chief of Plastic and Reconstructive Surgery Division at Stony Brook Medicine, led the team in the 10 surgeries at Stony Brook Children’s. The series of surgeries involved major reconstructions of Saline’s lips, mouth and nose. A hole in her face was sealed, and Dr. Dagum created a palate that separated her oral and nasal cavities so Saline could eat and speak normally again. With grafts from Saline’s ribs, Dr. Dagum recreated her missing nose. He used tissue from her lower lip to help create a new upper lip.

“All severe facial deformities are difficult to treat and are devastating to the children affected and their families,” said Dr. Dagum, who has traveled worldwide on many medical missions to treat children affected by Noma and other facial deformities. “It was not possible to successfully treat Saline in Kenya, and thankfully she was able to come to the United States and to Stony Brook. Here we saw her transform not only physically, but emotionally and socially, from a shy girl who would cover her face to a girl who plays and enjoys life.”

In June 2013, Leon S. Klempner, DDS, Assistant Clinical Professor in the Department of Children’s Dentistry at the Stony Brook University School of Dental Medicine, who assisted Dr. Dagum during all of the surgeries, led the process to bringing Saline to Stony Brook.

When Dr. Klempner visited Nairobi, Kenya, in 2010, it became a tipping point in his efforts to help children with cleft palates and other dental deformities. Upon learning about a young girl named Saline who suffered from the effects of Noma, he decided to start his own non-profit organization to help kids like her. The following year, the Smile Rescue Fund for Kids  became a reality. The Fund enabled Saline to come to the U.S and Stony Brook.

On his fateful 2010 trip to Kenya, Dr. Klempner was accompanied by his wife, Laurie Klempner, RN, who works in the antepartum unit at Stony Brook University Hospital, and Dr. Dagum.  Now Dr. Dagum serves on the Board of Directors of the Smile Rescue Fund for Kids.

According to Dr. Klempner, in Saline’s case, the progression of the bacteria was “somehow self-limiting” but the bacteria left scar tissue. Kenyan surgeons performed a microvascular free-flap reconstruction, but it failed. Her condition was too severe to be assisted by any of the world’s known charities, including the Smile Train organization, which referred her to Dr. Klempner. So he decided to start his own non-profit organization with the mission to “help one kid at a time.”

From June 2013 to June 2014, Saline’s life would dramatically change. Under the direction of Dr. Dagum, the Departments of Surgery, Anesthesia and Pediatrics performed the work free of charge as a designated School of Medicine teaching case. Three local families stepped forward to house Saline, including of Doug Muller, PA, of Dr. Dagum’s Division. Saline’s mother remained in Kenya with her older sister; two other siblings and her father are deceased.

The complicated procedures, and time needed for healing in between each reconstructive surgery, extended the need for Saline to remain in the United States. What was projected take several or perhaps six months took one year.

Saline had no problem with being on Long Island for one year, as she looked beyond the toil of enduring all those procedures and embraced her host families. Not knowing a word of English when she came, Saline now understands English quite a bit and speaks some too. While living the past few months with Jennifer Crean’s family in Hauppauge, she went skiing, ice skating, and fishing. Just before leaving for Kenya, Saline went on a roller coaster for the first time.

Crean said she is like any pre-teen who loves to do things, has a lot of energy, and plays video games too. Proud of her face, Saline is now enjoying smiling and looking forward to a new adventure in Kenya – attending a boarding school arranged by donors and volunteers via the Smile Rescue Fund for Kids.