Stony Brook Medicine at 40 Looks to the Future, Celebrates the Past 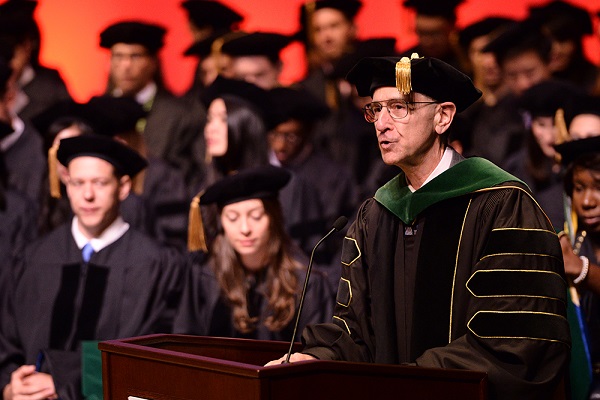 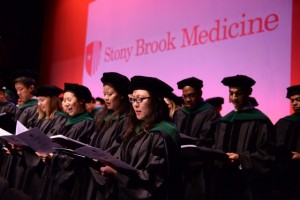 The Stony Brook University School of Medicine has come a long way in 40 years – from its first graduating class of 18 in 1974 to 129 graduates this year, to its rise as an academic medical center on Long Island and in New York State, and its evolution into a hub for collaborative medical research involving the University and other institutions. These themes resounded during the School’s 40th convocation and anniversary celebration that took place at Stony Brook University’s Staller Center on May 22.

Doctoral degrees were conferred on 129 graduates during the traditional hooding ceremony, and all of the graduates took the Hippocratic Oath for the first time as physicians. Members of the School’s first graduating class of 1974 joined the ceremony. To celebrate the 40-year journey of Stony Brook Medicine, the 40th graduating class, and all Stony Brook Medicine alumni – a total of more than 3,700 doctors – three brief video vignettes premiered.

The vignettes address Stony brook Medicine’s past, present and future. One vignette is devoted to the history of the School of Medicine, the other a “day in the life” of a current student, and the third devoted to the future of Stony Brook Medicine. The videos provided a unique platform to address the students, instead of a convocation speaker. The graduates heard from 64 speakers. Each shared their Stony Brook experiences and challenges as either a student, faculty member and/or alumnus.

“It’s a brave new world of healthcare that our graduates enter today,” said Kenneth Kaushansky, MD, MACP, Senior Vice President for the Health Sciences and Dean of the School of Medicine. “The plethora of knowledge we are acquiring about human disease, the emergence of healthcare reform, and our growing aging population are some of the elements that will continue to drive and change the way we practice medicine.”

Dr. Kaushansky encouraged the graduates and said that their “intellect, drive, mastery of the complex interaction between the art and science of medicine, humanity and devotion to the principles of medicine have truly been inspiring.” He also cited their research pursuits and services they provided as students, such as volunteering at health clinics and participating in global medicine programs.

“Now as physicians you will have an awesome responsibility and frequently be in the position to affect life-altering decisions,” he said. “You have now all experienced such patient interactions, and soon you will be leading them, and then teaching others.”

The Class of 2014 enters a profession that in many ways has transformed in the 40 years since Stony Brook’s first graduating class. Advancing medical technology has vastly improved diagnostic capabilities and procedures. Ever increasing knowledge on the mechanisms of diseases has enabled scientists to design more targeted treatments to better treat disease. And opportunities to communicate via the Internet with colleagues worldwide has led to an explosion of shared medical knowledge, research and clinical collaboration.

According to the Class of 1974 alumni present at the convocation, the impact of technology on both medical training and practice is one area of change that sets apart the current generation of new physicians to those who graduated 40 years ago.

“Everything is more mechanized now in every aspect of medicine,” said Dr. Andrew Matragrano, ’74, a specialist in pulmonary diseases practicing in Pennsylvania. “As students in 1974, we did not have CT scans for example, nor did we have personal computers to quench our thirst for medical knowledge right at our finger tips. These tools and others are commonplace now in medical education and practice.”

“Not only has technology changed our field, but so have the people,” said Dr. Janice Lark Coleman, ’74, an obstetrician-gynecologist practicing in South Carolina. “My field used to be dominated by men, but now it’s mostly practiced by women. Today there is more of a balance of male and female physicians, and that has changed the nature of the game.”

The Class of 2014 member selected to deliver the Student Address, Muath Mousa Bishawi, MD, thanked his classmates for inspiring him with their work ethic, their compassion for patients, and for supporting each other during the entire Stony Brook journey.

“Medical School has been the ultimate lesson in humility in all that we have to learn about the human body, science, and in becoming a compassionate physician,” said Dr. Bishawi. “Now we are entrusted to become the physicians we all set out to be when we began this journey as eager students four years ago.”

The Class of 2014 is a diverse group set to begin their residency training in July. More than one-third of the graduates (34%) will train in primary care positions to help meet the need for 15,000 additional primary care providers to care for the U.S. population over the next five years. Collectively, the graduates will launch their journeys into medicine at residencies in New York and 17 other states. They will train in 21 specialty programs such as Surgery and Emergency Medicine. Fifty-four percent will remain in New York State to practice.