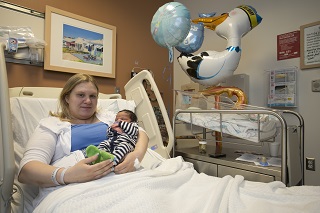 Egg-sized tumor threatens mother and baby, quick decisions by docs save both of their lives

STONY BROOK, N.Y., April 21, 2014 – Being tired and run-down during her second trimester of pregnancy was something that 25-year-old Sharon Savino had felt before being pregnant with her son and daughter. But after developing a bad cough around Christmas, she started coughing up blood, and knew something was completely wrong.

Savino went to a nearby community hospital where doctors gave her medication for bronchitis, but could not say why the blood had appeared. When more the blood was coughed up, Savino, concerned now for her unborn child, went to her obstetricians at Stony Brook University Hospital, where tests revealed she had an egg-sized tumor on the left side of her heart.

“I couldn’t believe it,” Savino told a reporter from the NY Daily News during an interview at Stony Brook University Hospital. “I just never expected I would hear that, especially when I’m so young. I was shocked.”

“It’s not a malignant tumor — not invading,” Taylor said during the interview. “But because of its size it causes problems inside the heart. Something needed to be done during that hospital visit.”

A decision needed to be made, perform open-heart surgery on the 27-weeks-pregnant Savino to remove the tumor, or deliver the baby preterm and wait until Savino healed from her cesarean section before doing heart surgery.

The team, led by Taylor, decided the tumor was too dangerous to wait, and Savino underwent open-heart surgery January 17 while her baby boy remained in-utero.

This type of open-heart surgery is not unusual, but performing it on a pregnant woman is rare and came with some risks. Looking through medical literature, Savino’s doctors found that there were only 17 other cases like hers in the world.

During the surgery, one of the biggest risks came with using a heart-lung bypass machine, which could impair blood supply to the fetus, making the baby’s heart rate drop rapidly. In some cases, that stress could induce labor.

Taylor and his team tried to reduce the amount of time Savino was on the machine and that her heart was stopped all together during the surgery. Most atrial myxoma patients spend about 45 minutes on the heart-lung machine and 25 to 30 minutes with the heart stopped during surgery. Taylor was able to reduce Savino’s time on the machine to 18 minutes with her heart arrested for only 12.

During the surgery, the baby was monitored closely by J. Gerald Quirk, MD, PhD, Professor, Obstetrics & Gynecology and Maternal Fetal Medicine, Stony Brook University School of Medicine, and a team from the Neonatal Intensive Care Unit who was on stand-by had Savino went into labor.

The surgery went off without a hitch and Savino remained in the hospital for a week after while she was monitored for signs of preterm labor. She spent the remaining two months at home before delivering baby Maximus via a C-section on April 2.

After Maximus was born, “I thought, ‘I can’t believe I made it,'” Savino told the NY Daily News. “He’s healthy, and I’m still going.”

The baby, weighing 7 pounds, 3 ounces, was welcomed by his father, Russell Daniels, 27, and siblings, Russell Jr., 4, and Shallyssa, 2.

Savino won’t ever forget what she went through to bring this baby into the world, and named him Maximus because she said, he was a fighter from the beginning.