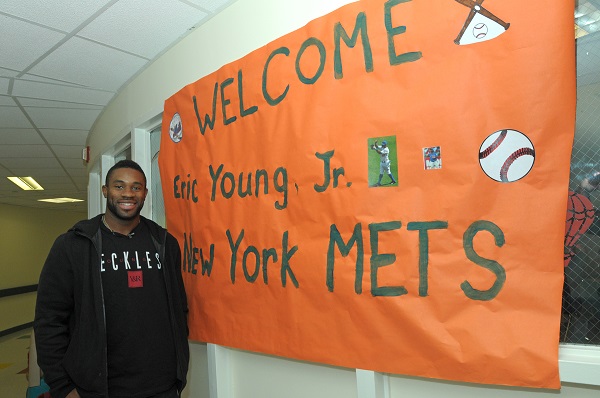 
STONY BROOK, N.Y., April 18, 2014 – To the Major League Baseball community he’s known as the leader of stolen bases for the National League, but on Thursday, April 17th, Eric Young Jr. stole the hearts of patients, family and staff at Stony Brook Children’s Hospital.

After a major winning streak in Arizona, Young flew back to New York to spend the day with patients at the Children’s Hospital. Young walked through the entire in-patient pediatric unit and the pediatric out-patient hematology/oncology clinic at Stony Brook University Cancer Center. The visit was a huge hit with the children, their families and staff who welcomed Young with a giant banner and wearing their Mets gear.

“It has been noted that it takes more than medicine to get well. Thanks to Eric Young Jr. and the New York Mets, Child Life was able to offer a once in a lifetime experience to some special children,” said Lauren Sharaby, MS, CCLS, Certified Child Life Specialist, Pediatric Hematology/Oncology, Stony Brook Children’s Hospital.

“Eric Young Jr. brought life, hope and light into what can be viewed as dark place, and put smiles on the faces of kids that needed a pick-me-up,” said Sharaby,  “These kids look up to baseball stars, and Eric gave them something to fight for!”

About 30 patients, along with family members, received a visit from Young, who signed autographs, posed for photos and even colored pictures with the kids.

This visit was made possible by the enthusiasm of two seniors at Stony Brook University School of Nursing, Katie Daza and Alexandra Maiello. After completing their pediatrics rotation, the duo noticed how excited the children get when they meet professional athletes and get autographs.

“Being in the hospital is just a nightmare for a child,” said Maiello. “I was hoping that this visit would make the children happy for a day. A better mental state can help with recovery.”

“I knew that some of the Islanders had been to [Stony Brook] Children’s Hospital, but I didn’t think any of the Mets had ever been to Stony Brook,” said Daza, a Queens, New York, native and dedicated Mets Fan.

Daza had seen on Instagram that the second baseman and outfielder for the Mets had visited some Little League teams. “We sent him a Twitter message asking if he’d pay a visit to Stony Brook Children’s Hospital,” said Daza, “and within five minutes he messaged back saying he’d do it.”

The rest was left up to the Child Life Program at Stony Brook Children’s, Young’s agent and the New York Mets.

Through the Child Life Program at Stony Brook Children’s, professionals provide therapeutic, educational, and recreational activities to meet the unique emotional and developmental needs of hospitalized children. Activities include medical play therapy, games, arts and crafts, as well as specialized programs such as animal assisted therapy, music therapy, birthday and holiday parties and organized visits such as this one by Eric Young Jr.

Maiello is interested in labor and delivery and hopes to be a midwife one day. She credits Stony Brook and its School of Nursing for the great learning experience she’s had.  “There’s so much more opportunity here because there’s a hospital affiliated with the school.”

Daza, who is interested in becoming a pediatric nurse, would like to continue to bring high-profile, smile-inducing visitors to young patients. “It wasn’t that hard to do, and it is so great for the kids,” she said.

And even though it was easy to tweet a celebrity, the two like-minded friends never thought about reaching out to one for their own benefit. “That’s nursing,” said Maiello. “You do something for others.”