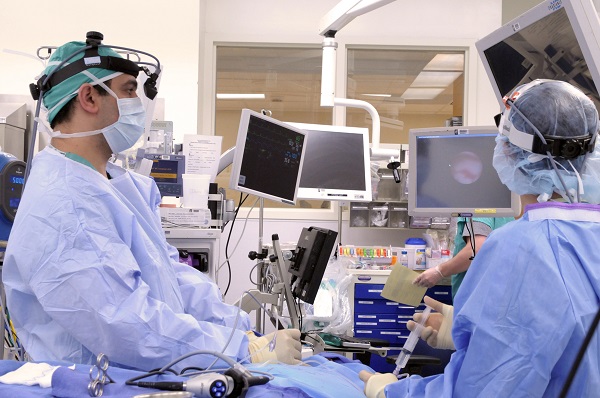 STONY BROOK, NY, February 24, 2014 –Tina Truglia had experienced excruciating pain in her jaw for nearly a decade and was misdiagnosed with everything from mumps to mono.  Eager to have her upcoming wedding free of pain, she flew from Flagstaff, Arizona to Long Island, foregoing a week of bridal festivities, including her bachelorette party, for an appointment with Mark Marzouk, MD, Assistant Professor of Surgery, Division of Otolaryngology-Head and Neck Surgery, Stony Brook University Hospital.

Tina was told by former doctors that she would have to have surgery to remove her salivary gland, something this 32 year-old bride-to-be did not want to do so close to her upcoming nuptials. The current standard in most institutions for treating salivary duct stones has been surgical removal of the gland that entails an incision in the neck and an overnight stay in the hospital. The conventional “open” operation also carries with it the potential complications of scarring, wound infection, and facial nerve injury. And leaving the stones untreated would have left Tina at risk for severe and repeated infections.

With her wedding just months away, Tina turned to the web and searched for another solution. What and who she found was only 15 minutes away from the home she grew up in in Farmingville, NY. During her appointment with Dr. Marzouk, he correctly diagnosed Tina with five salivary duct stones, the size of baby teeth, embedded in her gland.

Tina made the trip and had a salivary endoscopy, the new minimally invasive salivary gland procedure that can be used for both diagnosis and treatment at Stony Brook University Hospital. This procedure is performed by only a few surgeons in the United States.

In 2010, soon after Dr. Marzouk joined our faculty, he performed the first salivary endoscopy ever done on Long Island. This minimally invasive

technique allows for the examination of the salivary ducts under endoscopic guidance. Treatments, such as stone removal, duct dilatation, and steroid injection, can be done at the same time.

Sialolithiasis, or stone(s) in the salivary duct, is the most common disease of the salivary gland for which salivary endoscopy is done. It affects approximately 12 in 1,000 adults. Symptoms include pain, intermittent swelling of the gland, problems opening the mouth or swallowing, dry mouth and possibly severe infection.

The success rate of salivary endoscopy in treating sialolithiasis is over 90%, as reported in the current literature, with less than 5% recurrence. Recovery time is much faster than with an open technique, and patients may return to a normal diet the same day.

Salivary endoscopy allows for salivary gland surgery in a safe and effective way, and is done on an outpatient basis. Originally developed in Switzerland, the salivary endoscopy procedure is truly one of the most fascinating and patient-centered innovations introduced in the recent years in the field of otolaryngology-head and neck surgery.

On Wednesday, February 19, Tina was in and out of surgery within 25 minutes. She had all five stones removed by Dr. Marzouk.  She is on the mend; looking forward to eating whatever she would like at her wedding this June and is happy to be heading home to her fiancé.