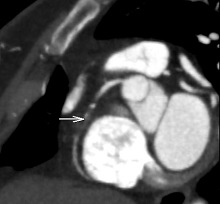 Stony Brook, NY – February 20, 2014 – Cardiovascular disease remains the number one killer in women, and it is often not easy to diagnose, as many suffer from atypical symptoms beyond chest pain that do not appear connected to blocked arteries or heart attacks. So says Stony Brook Medicine’s Dr. Michael Poon, whose leading tool to diagnosing cardiovascular disease is use of coronary computed tomographic angiography (CCTA), or cardiac CTA.

A nationally known pioneer in non-invasive cardiac imaging, Dr. Poon has transformed Stony Brook’s emergency department (ED) use of cardiac CT scans to complement less reliable and time-consuming evaluations like stress imaging and electrocardiogram tests to identify coronary artery blockages in patients with chest pain, or to rule out cardiopulmonary vascular disease or a heart attack. Dr. Poon has evaluated more than 10,000 cardiac CT scans since 2009 when the procedure became part of the routine ED protocol to triage patients with chest pain.

“CCTA is a game changer to diagnose heart disease, and it is particularly effective when we are evaluating women,” said Dr. Poon, a Professor of Radiology, Medicine, and Emergency Medicine, and Director of both Advanced Cardiovascular Imaging and the Dalio Center of Cardiovascular Wellness and Preventive Research at Stony Brook Medicine. “More frequently than men, women experience symptoms that seem more flu-like or fatigue-oriented rather than typical symptoms more commonly associated with a heart attack. Without CCTA, they may go undiagnosed.”

Dr. Poon and colleagues regularly apply the use of cardiac CT in the ED to better diagnose cardiovascular disease. The approach has paid off and is saving lives and healthcare costs.

Cindy Bennett of Port Jefferson is one of those patients. In August 2013, the 52-year-old experienced fatigue, cold sweats and nausea while at work. EMTs brought her to a local hospital where she was admitted due to an indication of slightly elevated cardiac enzymes. She was discharged after 24 hours because the EKG was determined to be negative and cardiac enzymes returned to normal. It was felt she could be further tested and followed by a cardiac physician as an outpatient.

Cindy had additional tests the following week – nuclear stress and echocardiogram. These were negative and she was issued a clean bill of health. Four weeks later she experienced similar symptoms: profuse sweating, jaw pain, neck pain, weakness and nausea. EMS responded, did another EKG which she was told showed no signs of a heart attack on the field.

Her response to standard questions, i.e., “Are you experiencing chest pain? … Do you have any pain going down your left arm?” when a cardiac event is likely was “no.” Due to her odd collection of symptoms and the event in August, EMS transported her to Stony Brook where her next EKG reading was off kilter enough for her emergency physician to recommend a closer look; he recommended a cardiac CTA.

Ten minutes later, Cindy and her family were stunned to learn that her right coronary artery was 95 percent blocked.  The cardiac CTA detected the problem almost instantaneously.

Over the next few hours, her cardiac enzymes jumped up at an alarming rate and it was clear she was having a full on, but soft-spoken heart attack. Within 24 hours, her artery was treated with a stent in the Stony Brook Heart Institute and she is currently going through cardiac rehabilitation. Collateral arteries had masked the strain the blocked artery was causing on her heart. Cindy was back at work a week later; her symptoms are no longer present.

Another patient, Vanessa Cuellar, 49, of Lake Grove, had no history of coronary artery disease despite having diabetes and being a smoker. However, for nearly a year she suffered from lower jaw pain. Her dentist attributed the pain to recent dental procedures or pain from temporomandibular joint (TMJ) problems of her lower jaw.

On the evening January 25, 2014, the same type of jaw pain stuck Vanessa again, but this time she also experienced pain in her left arm and chest. Vanessa’s fiancé brought her to Stony Brook’s ED. A cardiac CT was ordered and performed in the ED following unremarkable initial ECG and cardiac enzyme tests. The CT study showed a 70 percent narrowing of the left circumflex coronary artery. Vanessa was then admitted to the hospital. The following day, doctors performed a catheterization and placed two stents which opened the artery. Vanessa was discharged a few days later. Throughout February she began to feeling consistently better with improved energy. She is being followed closely by cardiologists at the Stony Brook Heart Institute.

The cases of Cindy and Vanessa are routine practice for Dr. Poon and his colleagues when evaluating cardiovascular disease. He says multiple times each month he evaluates similar cases in women that reveal significant coronary blockages that require immediate intervention.

Dr. Poon has conducted several national studies which indicate that not only does CCTA effectively detect coronary blockages, it is also a most cost-efficient way to rule out heart attack or other acute coronary syndromes, and dramatically cuts down on the length of unnecessary patient emergency room stays, hospital admissions, recidivism rates, and unnecessary invasive procedures.