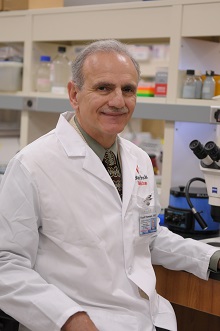 STONY BROOK, N.Y., December 18, 2013 – Stony Brook University Cancer Center Director Yusuf A. Hannun, MD, has received the Kuwait Prize in the category of Basic Sciences. The annual award issued by the Kuwait Foundation for the Advancement of Science (KFAS) recognizes the distinguished scientific accomplishments of an Arab scientist living anywhere in the world. Dr. Hannun, a native of Jordan, received the honor for his research on a class of lipids implicated in the cancer disease process.

An internationally recognized cancer researcher and physician-scientist, Dr. Hannun is also the Vice Dean for Cancer Medicine and Joel Kenny Professor of Medicine at Stony Brook. For the past 30 years, he has investigated how lipid metabolites serve as regulators of cell function. Dr. Hannun and colleagues discovered that a specific class of lipids, called bioactive sphingolipids, play a vital role in the development of cancer and in other human disease processes, such as neurodegeneration, inflammation, diabetes and infectious diseases.

The KFAS awarded the Kuwait Prize to Dr. Hannun for his entire research effort on bioactive sphingolipids, and because discoveries from his laboratory have advanced basic science research in the area of molecular biology.

Founded In 1976, the KFAS is funded by the Kuwaiti government and private enterprises. Nominations for the prizes are accepted from individuals, academic and scientific centers, professional peers and learned societies, but not political entities

For more information about Dr. Yusuf A. Hannun, see this link.