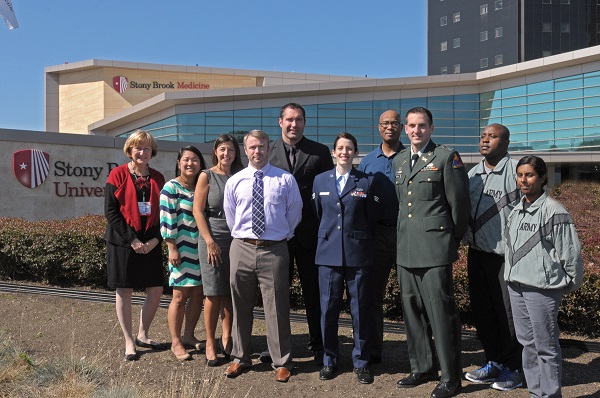 All Army or Air Force Vets, the candidates are a diverse group including a Purple Heart recipient, a medic, field pharmacist, and two West Point graduates

STONY BROOK, N.Y., November 7, 2013 – The Stony Brook University School of Nursing enrolled eight military veterans as candidates for a new baccalaureate program designed for veterans or reservists who want to become nurses. The School enrolled five men and three women, ranging from age 28 to 47, for the first term slated for January 2014. Six have served in the U.S. Army and two in the U.S. Air Force. All had some military medical training, and several had extensive experiences, including one as a medic, another as a field pharmacist and one who served as an Army Medical Mental Health Specialist.

The program is supported by a four-year $1.3 million federal grant from the U.S. Department of Health and Human Services’ Health Resources and Services Administration (HRSA).The Nurse Education, Practice, Quality and Retention: Veterans’ Bachelor of Science Degree in Nursing Program (VBSN) builds on veterans’ combat medical skills and experience and provides support in transitioning them from soldier to student. Stony Brook is the only school in New York State awarded a VBSN grant and will educate 80 veterans by 2016.

“We see this academic program as a win-win situation for veterans and for Stony Brook Nursing,” said Dr. Lee Anne Xippolitos, Dean of the School of Nursing. “Stony Brook has a long-standing commitment to recruit and educate nurses from diverse populations, and veterans are a highly diverse group of individuals with significant experience and commitment to excellence and service, two core values of nursing.”

According to the U.S. Bureau of Labor Statistics, more than one million new and replacement nurses will be needed by the year 2016 and estimates that employment for registered nurses is expected to grow 26 percent from 2010 to 2020, faster than the average for all occupations. In addition to increasing nurse numbers, the National Advisory Council on Nurse Education and Practice, policy advisors to Congress, agrees that diversifying the nursing profession is essential to meeting the health care needs of the nation.

“The program has a two-fold purpose,” said Lori Escallier, PhD, RN, CPNP, Principal Investigator, Associate Dean for Evaluation and Outcomes, and Clinical Professor of Nursing. “First, we are offering professional opportunities for veterans who are transitioning into civilian life; second, we are addressing the need to train more BS-prepared registered nurses to meet a growing national demand for nurses.”

The HRSA projects that the grants will enable more than 1,000 veterans nationally to obtain baccalaureate nursing degrees. Under the grant, Stony Brook and other recipients recruit veterans and prepare VBSN undergraduates for practice and employment in local communities and also develop career ladders that include academic and social supports, career counseling, mentors and linkages with veteran service organizations and community health systems.

“Almost every candidate I have interviewed for this program talks about how difficult it was assimilating back into civilian life, getting a job and using the medical skills they obtained in the military,” said Brenda Janotha, DNP-DCC, ANP-BC, MSN, APRN, Director of the program, Clinical Associate Professor and Chair of the Department of Undergraduate Studies. “This educational initiative enables us to build on the foundation of their military experiences as leaders with medical knowledge and develop them into nursing leaders.”

The first candidate accepted into the program is Jason Kokoszka, 36, a native of North Bellmore, NY, one of four Long Island natives to be part of the first class, and a recipient of the Purple Heart when he was wounded in Iraq in 2004 serving as a U.S. Army Ranger. His training as a soldier and the feeling he got from helping people survive on the battlefield sparked his interest in healthcare and nursing, which increased when he returned to civilian life.

“We were trained to stop bleeding, insert IVs, and administer care to fallen soldiers on the battlefield,” said Kokoszka. “I had that experience, and when I came home and watched nurses care for my father who suffered from brain cancer for five years I became more inspired and believed I could become a nurse and help people daily in some type of healthcare setting.”

Dr. Janotha said Kokoszka was accepted into the program based on his documented medical training, commitment to nursing, and prerequisite nursing education requirements, which he completed last spring after taking night classes on Long Island for approximately two years.

Completing the baccalaureate nursing program will vary for each student veteran. Each student will have an academic program tailored to his/her previous military medical experience and academic training. Some may complete the program in several years, while others, like Kokoszka, expect to complete it in a year or two.

Stony Brook’s VBSN also gives student veterans flexibility to attend school part-time due to employment or other obligations. Stony Brook University participates in the Yellow Ribbon Program which makes all veterans eligible for in-state tuition rates regardless of state residency.

The educational program is a cooperative agreement with HRSA, the selected schools, Department of Defense, and the Department of Veterans Affairs with the mission to increase the enrollment, retention and educational success of veterans.