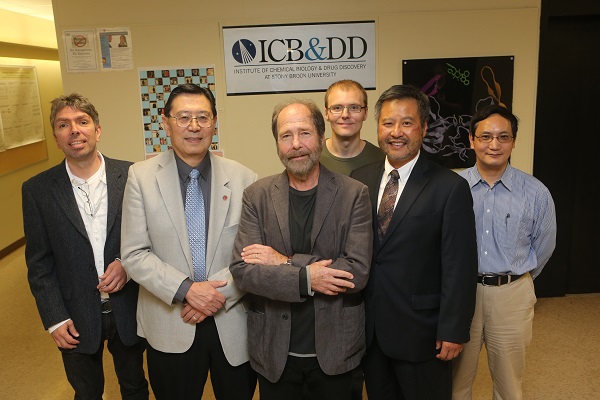 STONY BROOK, N.Y., November 6, 2013 – A multidisciplinary research team at Stony Brook University has received a five-year $3.8 million grant from the National Institute on Drug Abuse (NIDA), part of the National Institutes of Health, to develop new drugs for pain, inflammation, and potentially drug addiction. The drug development strategy is based on their discovery of intracellular transporters known as FABPs (fatty acid binding proteins) for a neurotransmitter in the body that regulates pain and stress.

The project, “Targeting FABPs,” is designated to the Institute for Chemical Biology & Drug Discovery (ICB&DD) at Stony Brook. Led by Principal Investigator Dale Deutsch, Professor of Biochemistry and Cell Biology, and a member of the ICB&DD, the project involves researchers and students from four different Stony Brook University academic departments, the ICB&DD, and the Laufer Center for Quantitative and Physical Biology.

FABPs are a family of small soluble protein carriers for fatty substances in cellular metabolism that transport the neurotransmitter known as AEA (endocannabinoid anadamide) from the cell membrane to interior of the cell where the AEA is destroyed which causes pain signals to increase. AEA and other endocannabinoids are compounds in the brain, similar to THC (the active ingredient in marijuana), which plays a role in numerous physiological processes, including appetite, memory and pain. With the NIDA funding, the research team is trying to determine if by inhibiting FABPs, the breakdown of AEAs is reduced and thereby pain can be minimized.

“The major goal of our drug discovery proposal is to develop drugs that inhibit these neurotransmitter transporters,” said Deutsch. “We expect that by targeting FABPs with certain compounds made by the ICB & DD group, endocannabinoid levels will increase within the brain, essentially resulting in anti-pain and anti-inflammatory effects.”

Deutsch said the team’s targeted strategy that reduces neurotransmitter breakdown may alleviate symptoms of drug withdrawal as does the nicotine patch for smokers or methadone for opiate replacement. He added that an additional advantage of the strategy is that by creating neurotransmitter levels to increase naturally, pain would theoretically be curbed without negative side effects, such as motor coordination problems.

A series of findings since the project began have helped to advance the research. First, in 2007 Dr. Martin Kaczocha, then a graduate student in Deutsch’s laboratory, now an Assistant Professor in the Department of Anesthesiology,  identified the FABPs as transporters for endocannabinoids. This discovery was published in an article that appeared in the April 14, 2009 issue of the Proceedings of the National Academy of Sciences (PNAS) entitled “Identification of intracellular carriers for the endocannabinoid anandamide.”

The research project built up further momentum later that year when Deutsch and Kaczocha presented Dr. Iwao Ojima, Stony Brook University Distinguished Professor of Chemistry and Director of the ICB&DD, with the concept of the therapeutic potential of small molecules that target FABPs. Through the ICB&DD, additional researchers became involved in the project. The expanded ICB&DD research team discovered a class of compounds that display significant inhibitory activity against FABPs. By using a computer modeling process led by collaborator Dr. Robert Rizzo, Associate Professor of the Department of Applied Mathematics and Statistics and member of the Laufer Center, the team screened more than one million compounds and identified lead compounds with molecule binding profiles similar to oleic acid, a natural FABP substrate. They selected 48 of these identified compounds, and are using chemical synthesis methods to identify other potential AEA-inhibitory agents that are both effective and safe.

Rizzo said as the research progressed he found it especially exciting to work “hand in hand with traditional experimental laboratories to identify and design inhibitors which target a specific protein.”

“It turned out that the core structure of what our research team determined to be the most promising compounds, known as ‘truxilloids,’ are found in a traditional Chinese medicine, called ‘incarvillaterine,’ which have been used for centuries to treat rheumatism and pain,” said Deutsch.

The investigators published their results on “truxilloids” in research article that appeared in the December 7, 2012 edition of PLOS ONE entitled, “Targeting Fatty Acid Binding Protein (FABP) Anandamide Transporters – A Novel Strategy for Development of Anti-Inflammatory and Anti-Nociceptive Drugs.” They showed that inhibition of FABPs and the subsequent elevation of the neurotransmitter AEA is a promising new targeted treatment approach against pain and inflammation.

“This collaborative effort among our ICB&DD faculty has the potential to lead to new treatments for many diseases and conditions that affect millions worldwide,” said Ojima. “The NIDA grant is a major step that will help provide the resources to discover and develop novel therapeutics, as well as shed light on the fascinating neurobiological processes involving FABP. This is exemplary multidisciplinary and collaborative research that the ICB&DD has been successfully promoting.”

Bill Berger (BS, Chemistry ’05) a PhD candidate in Dr. Ojima’s laboratory who will defend his dissertation on this work in December this year, synthesized and purified a variety of truxillic acid analogs, a crucial step that led to the identification of the most promising FABP inhibitors. He described this research project “as a high point in my PhD career, especially when in 2012 I described these findings to 300 leading scientists at the International Cannabinoid Research Society in Germany.”

“Bill Berger has been the driving force for the promotion of this project from the onset of his multidisciplinary collaboration,” said Ojima. “He has a truly exceptional ability to execute chemical synthesis, computational biology and drug design with an excellent understanding of biology. He is an independent and creative thinker, but at the same time an excellent team player. Thus, he worked closely with Rizzo, Kaczocha, Deutsch and me without any difficulty in understanding all aspects of the project.”

Brian Ralph, a junior Biology major at Stony Brook (with a focus in Quantitative Biology), a co-author on the PLOS ONE paper, biochemically screened compounds selected by the virtual program and discovered the top inhibitor, the current drug lead in the project, alpha-truxilic acid. He subsequently pursued binding studies of several alpha-truxilic acid analogues to determine how strongly each structure interacted with the target FABPs and to identify which analogue would be the best potential inhibitor of these proteins.

The research team also includes Dr. Trent Balius and William Joseph Allen in SBU’s Department of Applied Mathematics and Statistics; structural biologist Dr. Huilin Li who has dual appointments in the SBU Department of Biochemistry and Brookhaven National Laboratory; and, Dr. Samir Haj-Dahmane of the Research Institute on Addictions at the University of Buffalo.