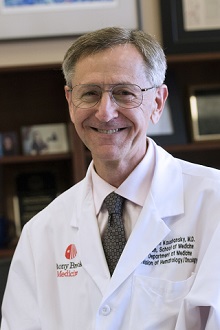 STONY BROOK, N.Y., October 25, 2013 – Kenneth Kaushansky, MD, MACP, Senior Vice President for the Health Sciences and Dean of Stony Brook University School of Medicine will be honored by the American Society of Hematology (ASH) with the 2013 Ernest Beutler Lecture and Prize. The prestigious award and accompanying lecture is an annual honor by the ASH given to leading national researchers and clinicians for their significant contributions to the understanding and treatment of hematologic diseases.

The Ernest Beutler Lecture, named for the late Ernest Beutler, MD, a past president of ASH and physician-scientist for more than 50 years, is a two-part lectureship that recognizes major translational advances related to a single topic. The 2013 award honors Dr. Kaushansky for his seminal research in the discovery of thrombopoietin (TPO), the growth factor that regulates platelet production. He shares the award with David J. Kuter, MD, DPhil, of the Massachusetts General Hospital Cancer Center for his translational research and clinical science achievements regarding TPO.

Both will present “Thrombopoietin: From Molecule to Medicine,” a lecture on December 9 at the 55th ASH Annual Meeting and Exposition in New Orleans. During the session, Dr. Kaushansky will discuss the basic biology of TPO and its effect on stem cells and megakaryocytes, and Dr. Kuter will review the clinical development of the recombinant TPO and the newer TPO receptor agonists.

“The work of Drs. Kaushansky and Kuter to identify and characterize thrombopoietin remains a seminal contribution to the area of megakaryocyte growth and platelet production,” said ASH President Janis L. Abkowitz, MD, of the University of Washington. “Their research has allowed for the translation of laboratory insights from the bench to the patient bedside and has helped improve the lives of those with a wide variety of thrombocytopenic bleeding disorders.”

As a past president of ASH and a past Editor-in-Chief of ASH’s journal Blood, Dr. Kaushansky has been a steadfast leader in both the Society and the field of hematology. In addition to his many roles within ASH, Dr. Kaushansky has also served as a president of the American Society for Clinical Investigation (ASCI) and the Western Society for Clinical Investigation. He currently is the lead editor of Williams Hematology.

At Stony Brook since 2010 as Senior Vice President for the Health Sciences and Dean of the School of Medicine, Dr. Kaushansky is chief of administration and academics of Stony Brook’s Health Sciences campus. He also serves as a Councillor of the National Institute of Diabetes and Digestive and Kidney Diseases, an ad hoc reviewer for Blood and several other high-impact scientific journals, and a Councillor of the Association of American Physicians (AAP).

He is an elected member of the Institute of Medicine of the National Academies of Sciences, the American Academy of Arts and Sciences, the AAP, and the ASCI.

Dr. Kaushansky continues to conduct research in the field of hematology. His research focuses on hematopoiesis, cloning, and characterizing many of the growth factor receptors that drive basic blood cell production.

Over the course of his more than 25-year career, Dr. Kaushansky has contributed several seminal research advances in hematopoiesis, including the discovery of TPO and the cytokine that helps to expand hematopoietic stem cells and promotes the expansion and maturation of megakaryocytes. These discoveries have provided insights into many congenital and acquired platelet disorders. Dr. Kaushansky’s work has been featured in nearly 200 scholarly publications.