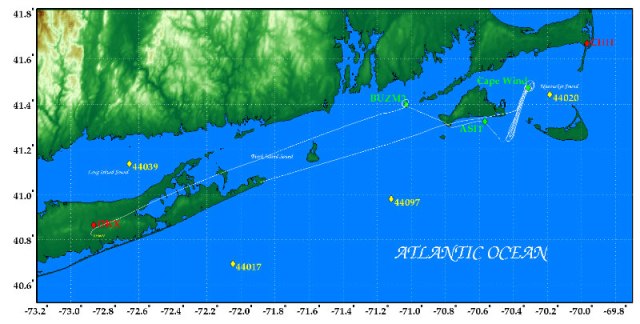 Research has the ability to improve meteorological forecasts over the ocean

STONY BROOK, NY, July 9, 2013 – Brian Colle, a Professor in the School of Marine and Atmospheric Sciences (SoMAS) at Stony Brook University is leading a project entitled Improving the Mapping and Prediction of Offshore Wind Resources (IMPOWR), a three-year $675,219 Department of Energy-funded project to improve atmospheric modeling of low-level wind fields using a combination of aircraft and tower observations. IMPOWR has the ability to improve meteorological forecasts over the ocean, which will benefit navigation, offshore wind operations and day-ahead power sales. Also contributing to the project are SoMAS graduate student Matthew Sienkiewicz and researchers at the University of Delaware Center for Carbon-free Power Integration.

Since there are relatively few weather observations over the coastal Atlantic Ocean, atmospheric models are important to map the offshore wind resources and to forecast the wind power potential from hours to days in advance, noted Professor Colle. These models have large windspeed uncertainties over the ocean, especially at a wind turbine height of a few hundred feet above the ocean, which leads to large uncertainties to the amount of power available for certain weather patterns.

“There is a large wind resource along the U.S. East coast that is just starting to be explored,” said Professor Colle. “It is important for universities such as Stony Brook and Delaware to help the wind power industry by leading efforts to collect observations and improve the models.”


The IMPOWR project, occurring in the spring and early summer of 2013 and 2014, includes the regions surrounding Nantucket Sound, which is the likely location of America’s first offshore wind farm by Cape Wind, Inc., a partner in the IMPOWR project that has given Stony Brook and Delaware the opportunity to instrument the platform on their 60 meter tower within Nantucket Sound.

Other towers with weather instrumentation for this project include the 25 meter Air-Sea Interaction Tower (ASIT) located just south of Martha’s Vineyard, owned by the University of Connecticut, and the 25 meter Buzzard’s Bay tower operated by the National Oceanic and Atmospheric Administration (NOAA). An instrumented Long-EZ aircraft, owned and operated by Ultra-Pure, Inc., collects temperature, wind, and humidity data at a frequency of 20 times per second as it profiles the lower atmosphere from about 30 m to 1500 m above the ocean surface. Professor John Mak at SoMAS is the pilot of the Long-EZ and has taken graduate student Matthew Sienkiewicz on a few flights. Sienkiewicz said that “a few low-level flights in a small single-engine aircraft definitely help grow a respect for the turbulent boundary layer,” and he looks forward to analyzing the data for his thesis.

There will be 15-20 Long-EZ flight days throughout this project, sampling a wide variety of wind and temperature regimes from cool onshore (easterly) flow regimes to warmer and more turbulent southwesterly cases. Several planned flights this summer will help sample the sea breeze and coastally enhanced winds during the summer.

“It can be a much different world a few hundred feet above the ocean,” said Professor Colle. “For example, during one flight it was 75oF and blowing 30 knots, while it was only 55oF and 10 knots over the relatively cool ocean. These unprecedented observations will help our models better predict these rapid wind variations with height, which ultimately will improve the offshore wind resource assessment and forecasts along the U.S. Northeast coast.”

Video: Long-EZ flies near Nantucket Bay during one of the IMPOWR Missions
###