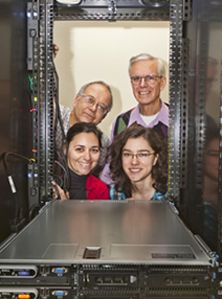 SBU researchers (back row, l-r) Peter Stephens and Philip Allen and (front row, l-r) Marivi Fernandez-Serra and Betul Pamuk, by the Njal supercomputer cluster, a small Beowulf cluster that is composed of 96 cores and 25 nodes, which was used to run all the computer modeling that produced the results of the study.

STONY BROOK, NY, May 9, 2012 – A team of researchers from the Stony Brook University Department of Physics & Astronomyalong with colleagues from the Department of Condensed Matter Physics at Universidad Autónoma de Madrid (UAM) in Spain, explain a puzzling water anomaly in a paper published in the May 9 edition of Physical Review Letters entitled, “Anomalous Nuclear Quantum Effects in Ice.” The work details an anomaly – a deviation from the common form – of water ice that has been largely neglected and never before explained.

“We believe that our study explains a rare, seldom mentioned property of ice which should be included in the list of water anomalies as an example in which quantum effects are anomalous and increase with temperature,” said Marivi Fernandez-Serra, an assistant professor in the Department of Physics & Astronomy at Stony Brook, who collaborated with three UAM professors and Stony Brook Professors Philip Allen and Peter Stephens, and PhD student Betul Pamuk.

In this contribution, the researchers show that the volume of water (H2O) ice depends on the quantum “zero-point” motion of the H and O atoms in an opposite way from “normal” materials. Crystals shrink as they are cooled, but because of “zero-point” motion, shrinking stops before reaching temperatures of absolute zero. This effect is a result of the Heisenberg Uncertainty Principle, which states that there is a fundamental limit on the accuracy with which certain pairs of physical properties can be simultaneously identified – the more precisely one property is measured, the less precisely the other can be controlled, determined or known.

The theoretical model proposed, which is backed by careful computational modeling and an X-ray diffraction experiment at Brookhaven National Laboratory’s National Synchrotron Light Source, attributes the effect to the peculiar nature of the hydrogen bond. “In water, quantum mechanics manifests in a very striking way,” said Fernandez-Serra. “Its effects are more dominant with increasing temperature, which is rather unexpected.”