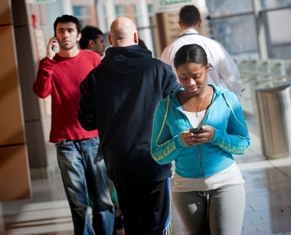 Findings, Reported in Gait and Posture, Suggest Voice-Activated Texts May be Safer

A Stony Brook University study that tested cell phone use/texting while walking showed use of the mobile device often results in walking errors and interferes with memory recall.

STONY BROOK, N.Y., January 18, 2012 – Talking on a cell phone or texting while walking may seem natural and easy, but it could be dangerous and result in walking errors and interfere with memory recall. Researchers at Stony Brook University found this to be the case in a study of young people walking and using their cell phones. The study is reported in the online edition of Gait & Posture.

“We were surprised to find that talking and texting on a cell phone were so disruptive to one’s gait and memory recall of the target location,” says Eric M. Lamberg, PT, EdD, co-author of the study and Clinical Associate Professor, Department of Physical Therapy, School of Health Technology and Management, Stony Brook University.

Dr. Lamberg summarized that the changes from the baseline blindfolded walk to testing indicated that participants who were using a cell phone to text while walking and those who used a cell phone to talk while walking were significantly slower, with 33 and 16 percent reductions in speed, respectively. Moreover, participants who were texting while walking veered off course demonstrating a 61 percent increase in lateral deviation and 13 percent increase in distance traveled.

Although walking seems automatic, areas in the brain controlling executive function and attention are necessary for walking. Dr. Lamberg says that the significant reductions in velocity and difficulty maintaining course indicates cell phone use and texting impacts working memory of these tasks.

“We are using the findings to help physical therapy patients improve true functional walking while making them aware that some tasks may affect their gait and/or certain aspects of memory recall,” said Dr. Lamberg. He emphasizes that using a cell phone while walking reflects a “real world” activity, one that recovering patients are likely to engage in sooner rather than later during their recovery process.

Lisa M. Muratori, PT, EdD, study co-author and Clinical Associate Professor in Stony Brook’s Department of Physical Therapy, points out that the study is also being used to help them further understand the underlying mechanism causing the difficulty in performing the dual-task of walking while using a cell phone.

Drs. Muratori and Lamberg believe that these results bring new and important insight into the effects of multi-tasking with mobile devices. Elucidating the cause of this disruption may allow for new physical therapy treatment interventions and modifications in technology – such as voice-activated texts – that may lessen the potential dangers of walking while using hand-held devices.