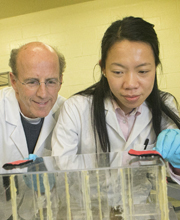 
STONY BROOK, N.Y., December 18, 2012 – Low-intensity vibrations led to improvements in the immune function of obese mice by restoring B and T-cell populations and thereby diminishing consequences of obesity, according to a study published online in The FASEB Journal. Professors Ete Chan and Clinton Rubin in the Department of Biomedical Engineering at Stony Brook University believe if the same effect can be found in people, daily exposure to such vibrations could have clinical benefits for people suffering from a wide ranges of immune problems related to obesity.

“This study demonstrates that mechanical signals can help restore an immune system compromised by obesity,” said Clinton Rubin, Ph.D., Distinguished Professor, Chair of Biomedical Engineering, and Director of Stony Brook’s Center for Biotechnology. “While it is well known that obesity can cripple many physiologic systems, this work suggests that mechanical signals—in the absence of drugs—can help combat this disease and its sequelae. That these mechanical signals are so brief, and so mild, is further evidence of how exquisitely tuned our body is to external signals, and that remaining active—climbing stairs at work, taking a walk at lunch, standing while reading a book—will help achieve and retain good health.”

In the study titled “Bone structure and B-cell populations, crippled by obesity, are partially rescued by brief daily exposure to low-magnitude mechanical signals,” Dr. Rubin and colleagues fed a group of adult mice a high fat diet for seven months to make them obese. At the end of this first phase of the experiment, the damage to the immune and skeletal systems of the obese mice was significant, decreasing B- and T-cell populations in the blood, and markedly accelerating the loss of bone. The second phase began after the mice were obese relative to regular controls, with the creation of a sub-group that was subjected to daily 15-minute bouts of low-intensity vibration, barely perceptible to human touch.

The results showed that the vibration intervention helped to rescue both the immune and skeletal systems, returning them toward outcomes measured in mice that were fed a regular diet. The study also provides evidence that obesity markedly reduces the production of B- and T-cells and that brief daily exposure to low magnitude mechanical signals rescues B- and T-cell populations, even in a mouse that is already obese.

“For some time we have known that a variety of mechanical stimuli can have a profound, anabolic effect on bone biology, but the current work by Professors Chan and Rubin expands these favorable effects to the immune system and points to a possible beneficial effect in significantly overweight patients,” said Kenneth Kaushansky, MD, Senior Vice President for the Health Sciences and Dean of the Stony Brook University School of Medicine. “With our realization that the epidemic of obesity will greatly affect the health of tens of millions of Americans, novel approaches to maintaining health of overweight patients come as very welcome news.”

In conclusion, the study authors also wrote that “Understanding the role of the stem cell niche in promulgating obesity-related disorders, and the salutary action of mechanical signals, may ultimately contribute to a unique nondrug treatment strategy for a host of diabetes- and obesity-related health problems.”