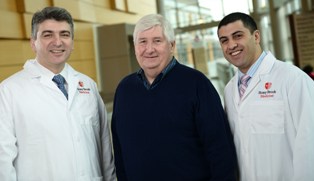 
STONY BROOK, NY, March 13, 2013 — When Robert Rouge of Riverhead, NY, signed up for what he thought would be a routine vascular screening at Stony Brook University Hospital on July 16 last summer, he didn’t expect the results to show any problems. What actually happened was far from routine: the screening ultrasound revealed a dangerously large abdominal aortic aneurysm, which needed immediate surgical intervention.

Rouge was shocked. “I had had no symptoms whatsoever and I was looking forward to my daughter’s wedding, two weeks after the free screening event,” said the 65-year-old graphic designer. “I only agreed to go because my fiancé urged me to; she thought I had some of the risk factors for vascular disease.”

When an abdominal aortic aneurysm (AAA) ruptures, the result is severe pain, massive internal bleeding and in most cases, sudden death.

“Abdominal aortic aneurysms seldom give warning signs so a finding like this is not unusual,” said vascular surgeon Apostolos Tassiopoulos, MD, Chief of the Division of Vascular Surgery at Stony Brook University Hospital (SBUH), who initiated the community screening program in 2011. “Many people don’t know they have an aneurysm until it ruptures.”

Rouge’s aneurysm was discovered at the free screening event by Morad Awadallah, MD, a vascular surgeon at SBUH. “His aorta measured 6.7 centimeters, nearly three times normal size,” Dr. Awadallah said. “It was potentially life threatening. We explained the situation to Mr. Rouge, and he agreed to return to the hospital for additional testing followed by a minimally invasive endovascular aneurysm repair (EVAR).”

Rouge received an endovascular stent graft on July 19, which means the aneurysm was bypassed with a fabric tube supported by metal scaffolding. Blood flows through the graft rather than through the aneurysm, minimizing the chance of rupture.

“It was incredible,” Rouge said. “I was able to walk my daughter down the aisle at her wedding the following week. I even made it to the rehearsal dinner.”

Dr. Awadallah noted that open aortic repair requires 48 hours in intensive care, an average seven days of hospitalization, and six to 12 weeks of recovery. In contrast, the minimally invasive angioscopic procedure, which accesses the aneurysm through two tiny incisions in the groin rather than through a large, abdominal incision, enables most patients to go home in just 24 hours.

An estimated one million Americans live with an undiagnosed abdominal aortic aneurysm (AAA) – including 20,000 in Suffolk County alone. “Our goal in sponsoring screenings is not only to save lives through early detection, but also to educate the medical community and the public about this highly treatable but underdiagnosed condition,” Dr. Awadallah said. “In much of Europe, patients at risk are routinely checked for aneurysms. Here, we are still working to communicate the value and urgency of early detection.”

Stony Brook’s free vascular screenings are open to anyone with risk factors who registers in advance. A referral is not required. Telephone pre-registration and a brief qualifying interview are necessary. In addition to getting an ultrasound for AAA, participants are tested for two other serious, but often-silent vascular conditions for a total of three, painless 10-minute tests:

About 1,100 people have benefited from Stony Brook’s vascular screening program over the past two years. “Based on population studies, about 20,000 people in Suffolk County may have undiagnosed AAAs,” Dr. Tassiopoulos said.

Although any adult can develop AAA, the risk is higher for:

“If you have any combination of these risk factors, we suggest you talk to your primary care physician, cardiologist or vascular specialist about getting screened,” Dr. Tassiopoulos said.

Medicare covers an ultrasound screening for men age 60 and over with a family history of AAA, and for men aged 65 to 70 who have ever been smokers, Dr. Tassiopoulos said. “Unfortunately, even this minimal level of screening is underutilized,” he said.

Rouge said he feels grateful to Stony Brook, and so do his fiancé and family. “Not only do I appreciate the excellent care I received, but also the fact that Stony Brook offers these screenings so that others may be tested for a possible lifesaving outcome,” he said.