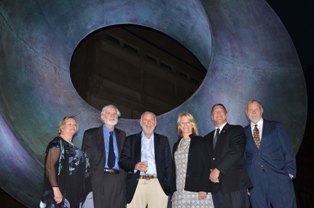 A celebration of the fusion of mathematics and art, Umbilic Torus was suggested to the Simons by Anthony Phillips of the Mathematics Department (interestingly enough serving at the time as interim Chair of the Art Department). The donors Jim and Marilyn Simons, who are longtime active supporters of the University, established the Simons Center for Geometry and Physics in 2010 and more recently pledged $150M for the University’s Re-Imagining Stony Brook campaign.

“The Umbilic Torus was the most elegant and appropriate sculpture for this setting,” said Jim Simons at the dedication. “Knowing all of the work that Helaman, his wife and his team put into this, I can see how it came out as wonderful as it did.”

Creating this 24-foot high, nearly 10-ton bronze magnum opus took Ferguson nearly two years and involved a crew of over a dozen artists, engineers, programmers and welders. Ferguson and his team modeled and welded a series of smaller test sculptures, built a 16-foot robot to complete programmed carvings into sandstone, created molds for the final bronze panels at two foundries in Maryland before assembling, disassembling, transporting and finally installing the piece at Stony Brook University with the additional work of welding, texturing and applying patina to create what the artist describes as “a celebration of mathematics, the queen of the sciences, a celebration of first order in granite and silicon bronze.”

“Sitting where it does, the Umbilic Torus provides an elegant gateway to the nearby Simons Center for Geometry and Physics on one side, and from the other direction frames an entrance to the academic mall,” said President Stanley at the dedication. “This remarkable sculpture emphasizes the important relationship between math, science, art and the humanities.”

Helaman Ferguson earned his AB in Liberal Arts from Hamilton College and his PhD in Mathematics from the University of Washington, and has devoted the last 40 years to creating intricate sculptural works of art based on complex mathematical phenomena. In his work he uses many and varied specialized tools, including computers, virtual image projection from equations, tool position and orientation monitoring, air hammers and drills, carbide cutters, diamond corers and saws, diamond chains, cables, pulleys, hydraulic rams, gantry cranes. He uses a hammer and chisel too; his studio is a canal through which mathematically designed things take form in geological materials.

According to Dr. Ferguson, “The form of Umbilic Torus is a continuous donut-shaped surface patterned with a space-filling curve. It stands as a monument to the timelessness of human creativity as though it had just been unearthed with painstaking care from a Chinese tomb or an Egyptian pyramid–its Faience-tinted bronze corroded by centuries of silent waiting. The space-filling curve, mysterious as the Chinese calligraphic script or Egyptian hieroglyphics — flows over the surface, defining it, by beginning at any point and meticulously returning to that point after traversing every inch of its area. The form of the space-filling curve is universal, known from the earliest architecture and ornament. The angles of the space-filling curve play a harmonious counterpoint to the torus, or ring, which has always signified unbroken love.”

Editors’ Note: Videos of the Umbilic Torus being created and installed can be viewed here.