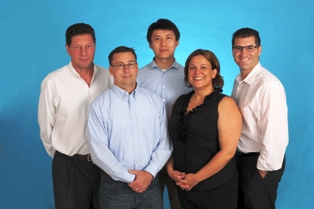 STONY BROOK, N.Y. – July 12, 2013 – The Center for Biotechnology at Stony Brook University has appointed Reinhard Warnking and Joseph Scaduto as the Center’s BioEntrepreneurs-In-Residence (B-EIR). The role of the B-EIRs will be to launch new bioscience ventures in the Long Island region based upon commercially promising biomedical technologies developed by Stony Brook University with the goal to spur economic development in the region.

The first phase of Stony Brook’s B-EIR program is a pilot project, conceived and run by the Center for Biotechnology and supported by the Division of Science, Technology and Innovation (NYSTAR) of Empire State Development, New York’s chief economic development agency. Initial funding was provided by the Center for Biotechnology and private donors, which was matched by the Simons Foundation and Stony Brook Research Office. Additional support came earlier this year from the SUNY Research Foundation, when it announced EIR awards of $25,000 each for five separate projects involving SUNY campuses. One award went to Stony Brook University. The Suffolk County Industrial Development Agency has since committed $25,000 in additional support, bringing total funding for the pilot phase to $460,000.


“This type of public-private partnership is certain to help catalyze the formation of a bioscience cluster in the region,” says Dr. Clinton T. Rubin, Director of the Center for Biotechnology, and Chair of the Department of Biomedical Engineering. “Having great science provides a terrific foundation. From that critical resource, you need management talent, bioscience-savvy investors, a supportive business infrastructure, and ongoing support for success and long-term impact.”

The Center’s Advisory Board considered more than 40 candidates from around the nation for the role of B-EIR. Criteria for selection included experience developing early-stage technologies and companies, entrepreneurialism and leadership skills, and a commitment to build the company in the LI region.

Warnking is a seasoned entrepreneur and inventor, with over twenty years of experience in the medical device field.  He has successfully led five ultrasound companies and has more than 10 filed or issued patents to his credit.

Scaduto most recently served as the Assistant Director of Business Development at the Center for Biotechnology, as well as the founding Executive Director of the Long Island Life Sciences Initiative (LILSI). He has over a decade of experience providing business development expertise, strategic planning services and technology commercialization guidance to emerging and expanding bioscience companies.

“I appreciate the opportunity to commercialize a promising biomedical technology developed by Stony Brook University,” said Mr. Scaduto. “As an entrepreneur-in-residence, I also look forward to joining the bioscience business community on Long Island in this new capacity.”

The Center and its Advisory Board expect to bring on at least one additional B-EIR during the pilot phase, with the goal of securing sustained funding that will allow for future expansion.

About the Center for Biotechnology at Stony Brook University

The Center for Biotechnology is a cooperative research and development partnership between universities, private industry and New York State. It is involved in the discovery and early stage development of commercially promising technologies resulting from academic research, and the creation of strategic infrastructure that promotes the growth of the life sciences industry. The Center for Biotechnology has contributed to the development of more than a dozen approved products including ReoPro, Oracea, Cavistat, V3D Colon Virtual Colonoscopy and Exogen Bone Healing System. It has also helped launch eighteen companies.