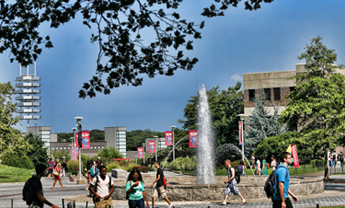 STONY BROOK, NY, January 3, 2013 – Stony Brook University was named the 22nd best value in public colleges and universities for in-state students and the 9th best value for out-of-state students for combining “outstanding education with economic value” by Kiplinger’s Personal Finance in its top 100 rankings of public four-year institutions. Last year, Kiplinger ranked Stony Brook as the 35th best value for in-state and 29th for out-of-state. The rankings are posted on the
Kiplinger website and will appear in the February 2013 issue of Kiplinger.

According to Kiplinger, Stony Brook is one of the most selective schools on the list with an admission rate of 39 percent. It is also one of only three in Kiplinger’s top 25 best values to charge an out-of-state sticker price of less than $30,000 (after need-based aid, the cost for out-of-state students is $22,543). Kiplinger’s assesses quality and affordability according to a number of measurable standards including competitiveness, graduation rates, academic support, student indebtedness at graduation, cost and financial aid.

“It’s always gratifying to be recognized by Kiplinger’s Personal Finance as a best value in public education,” said Stony Brook University President Samuel L. Stanley Jr., MD. “Stony Brook prides itself on delivering the best education at the most affordable price, which is especially important in these difficult economic times. This affordability, together with academic excellence, continues to enhance the value of a Stony Brook degree.”

Stony Brook University was also highlighted for its course offerings, 68 majors and 78 minors across 200 academic programs; 98 percent of faculty members possessing either doctoral degrees or the highest degrees in their respective fields; faculty being responsible for more than 1,700 inventions and more than 500 patents; and a 92 percent retention rate for freshman staying on for their sophomore year.

The ranking of Stony Brook University as the 22nd best value public college and university for in-state students and ninth for out-of-state students in the nation is the latest in outstanding rankings conferred upon the university by independent organizations, including recent recognition by the U.S. News & World Report as being among the top 100 national universities and the top 40 public universities for 2013.