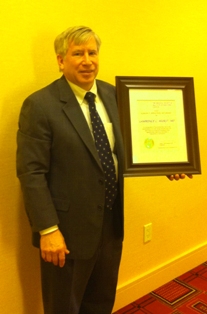 STONY BROOK, N.Y., December 23, 2010 – Lawrence C. Hurst, M.D., Professor and Chair of the Department of Orthopaedics at Stony Brook University Medical Center, has received the 2010 Albion O. Bernstein, MD Award from the Medical Society of the State of New York (MSSNY). The award is given to a physician or scientist who has made “the most widely beneficial discovery or developed the most useful method in medicine, surgery, or disease prevention” during a calendar year. He was presented with the award at the Society’s Council Meeting at the Marriott in Uniondale, N.Y., on December 9.

Dr. Hurst received the honor for his role in discovering and developing a new injectable form of the enzyme, collagenase, to treat Dupuytren’s contracture, a debilitating disease caused by progressive accumulation of collagen that deforms hands and fingers. Dr. Hurst discovered this treatment during a 15-year bench-to-bedside process with Stony Brook colleague Marie A. Badalamente, Ph.D., Professor of Orthopaedics. The new treatment passed Food and Drug Administration approval in 2010.

The award, which consists of a citation from the MSSNY and $2,000 prize, is one of the highest honors given by the Society to member physicians and scientists nationwide. It was established by the late Morris J. Bernstein in 1962 in memory of his son, a physician who died in an accident while on hospital call in 1940 in New York City.

“Dr. Hurst played a major role in the groundbreaking research at Stony Brook that led to a new treatment that can improve the quality of life for millions of people worldwide who are afflicted by Dupuytren’s contracture,” says Dorothy Lane, M.D., M.P.H., Distinguished Service Professor in the Department of Preventive Medicine at SBUMC, who nominated Dr. Hurst for the award.

“Larry is a true physician-scientist who recognized a major shortcoming in the care of many Dupuytren’s contracture patients, and thereby devised a simpler, more elegant solution and turned the new approach into reality,” says Kenneth Kaushansky, M.D., Senior Vice President of Health Sciences and Dean, Stony Brook University School of Medicine. “To compare the prior surgical approach to the new medical treatment of Dupuytren’s Contracture is truly a testament to Larry’s insight and creativity, and to the very fabric of academic medicine. This award recognizes all of this, and it is very well deserved.”

Dr. Hurst, an internationally recognized orthopedic surgeon specializes in hand surgery, has been Chair of Orthopaedics at Stony Brook since 1996. He came to Stony Brook in 1979 and has served in various clinical and academic leadership capacities, including Chief of Orthopaedic Service and Chief of Hand Surgery. Dr. Hurst is a member of the American Society of Hand Surgery and serves on the Society’s Executive Committee.

Past recipients of the award include other nationally and internationally known physicians and scientists, specializing in areas such as genetics, oncology, and infectious diseases. Dr. Hurst is the second Stony Brook physician to receive the award. In 2007, Janet E. Larson, then Chief of Neonatology at SBUMC, was a recipient.

The MSSNY, a non-profit organization committed to representing the medical profession as a whole, is an organization of approximately 30,000 licensed physicians, medical residents, and medical students in New York State. Members participate in both the state society and in their local county medical societies.