“Survival of the Fittest” Now Applies to Computers 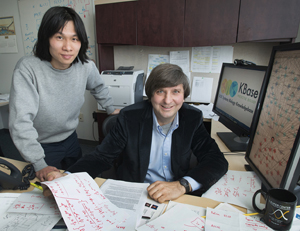 “Survival of the Fittest” Now Applies to Computers

Pictured from left to right are Sergei Maslov and Tin Yau Pang.

Computational biologist Sergei Maslov, a research staff member in Brookhaven National Laboratory (BNL), holding appointments with Stony Brook University’s Department of Physics and Astronomy and Laufer Center for Physical and Quantitative Biology, worked with Tin Yau Pang, a graduate student in the Department of Physics and Astronomy at Stony Brook, to compare the frequency with which components “survive” in two complex systems: bacterial genomes and operating systems on Linux computers. Their work, “Universal distribution of component frequencies in biological and technological systems,” was published in the April 9 edition of Proceedings of the National Academy of Sciences. Dr. Maslov, who received his PhD in Physics from Stony Brook in 1996, discussed the discovery on NPR’s Marketplace Tech (the second story in the April 2, 2013 podcast).

Maslov and Pang set out to determine not only why some specialized genes or computer programs are very common while others are fairly rare, but to see how many components in any system are so important that they can’t be eliminated.

“If a bacteria genome doesn’t have a particular gene, it will be dead on arrival,” Maslov said. “How many of those genes are there? The same goes for large software systems. They have multiple components that work together and the systems require just the right components working together to thrive.'”

Using data from the massive sequencing of bacterial genomes, now a part of the Department of Energy’s Systems Biology Knowledgebase (KBase), the researchers examined the frequency of occurrence of genes in genomes of 500 bacterial species and found a surprising similarity with the frequency of installation of 200,000 Linux packages on more than 2 million individual computers. Linux is an open source software collaboration that allows designers to modify source code to create programs for public use.

The most frequently used components in both the biological and computer systems are those that allow for the most descendants. That is, the more a component is relied upon by others, the more likely it is to be required for full functionality of a system.

It may seem logical, but the surprising part of this finding is how universal it is.

“It is almost expected that the frequency of usage of any component is correlated with how many other components depend on it,” said Maslov. “But we found that we can determine the number of crucial components – those without which other components couldn’t function – by a simple calculation that holds true both in biological systems and computer systems.”

For both the bacteria and the computing systems, take the square root of the interdependent components and you can find the number of key components that are so important that not a single other piece can get by without them.

The finding applies equally to these complex networks because they are both examples of open access systems with components that are independently installed.

“Bacteria are the ultimate BitTorrents of biology,” he said, referring to a popular file-sharing protocol. “They have this enormous common pool of genes that they are freely sharing with each other. Bacterial systems can easily add or remove genes from their genomes through what’s called horizontal gene transfer, a kind of file sharing between bacteria,” Maslov said.

The same goes for Linux operating systems, which allow free installation of components built and shared by a multitude of designers independently of one another. The theory wouldn’t hold true for, say, a Windows operating system, which only runs proprietary programs.

This is the second paper Maslov and Pang have published together in the Proceedings of the National Academy of Sciences, the first time being in 2009 with a paper on “Toolbox model of evolution of prokaryotic metabolic networks and their regulation.” The researchers also published research on “A toolbox model of evolution of metabolic pathways on networks of arbitrary topology” in the May 19, 2011 issue of PLOS Computational Biology.

“Tin Yau Pang entered our Ph.D. program in 2007, and he is about to graduate,” reports Laszlo Mihaly, Professor and Chair of the Department of Physics and Astronomy. “We actively promote the research opportunities in Brookhaven Lab to our PhD students. We have quite a few students doing research with BNL advisors, and the possibility of connecting to a BNL research group helps us to recruit the best incoming students.”

About Dr. Maslov
Sergei Maslov is the computational biology group leader at the Biosciences Department, Brookhaven National Laboratory, adjunct professor at Department of Physics and Astronomy and executive member at the Laufer Center for Physical and Quantitative Biology at Stony Brook University. He also leads the team of scientists at BNL, Cold Spring Harbor Laboratory, and Yale University constructing Systems Biology Knowledgebase (KBase). In addition to Brookhaven this DOE-wide effort involves scientists from Lawrence Berkeley, Argonne, and Oak Ridge National Labs. Systems Biology Knowledgebase is aimed to integrate and make broadly accessible everything we know or can learn about plants and microbes from the genetic and molecular to the organism and systems level. The BNL-led effort concentrates on genotype-to-phenotype relations and complex biomolecular networks in plants. For more information, visit http://www.kbase.us/


While a graduate student at Stony Brook. Dr. Maslov started out in condensed matter theory, “but his interest turned to biological physics and computational biology,” explains Dr. Mihaly. Dr. Maslov is affiliated with Stony Brook University through the Department of Physics and Astronomy and the Laufer Center for Physical and Quantitative Biology.

Tin Yau Pang is working toward his PhD in Physics at Stony Brook University. The focus of Mr. Pang’s research is to study complex networks and understand what give rise to their characteristic features. His dissertation will cover the work from two papers, “Toolbox model of evolution of prokaryotic metabolic networks and their regulation” and “A Toolbox model of evolution of metabolic pathways on networks of arbitrary topology.”