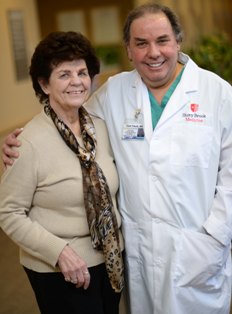 Using the Surefire Infusion System, a catheter is inserted into the affected organ through an artery. The catheter then delivers the therapeutic beads directly to the malignancy.

The catheter has a highly sophisticated expandable tip that blocks the beads from scattering to healthy tissue. Studies show that the infusion system delivers 99 percent of the dose to the intended area versus standard catheters, which allow nearly 30 percent of the cancer-fighting agent to escape into and possibly harm non-cancerous tissue.

Interventional radiologist Carl Tack, MD, of Stony Brook Cancer Center began using the Surefire Infusion System at Stony Brook in August 2012. One of Dr. Tack’s patients who has had good results from Surefire treatments is 73-year-old Mary Foy, who had surgery and chemotherapy for colon cancer in 2007. When she later developed liver cancer, she was referred to Dr. Tack.

“The results are amazing,” Dr. Tack said. “I can inject chemoembolization agents — basically cancer fighting beads — precisely where they’re needed, to shrink or even kill a tumor, while protecting the healthy cells.” The procedure can be used for about 75 percent of patients who need chemoembolization, and patients like Mrs. Foy often need repeat procedures as the tumors return.

“This is a major advance,” he said. “I can treat tumors without invasive surgery. And unlike traditional chemotherapy, I can target inoperable tumors without exposing the entire body to cancer-fighting drugs. There are very few side effects, so it’s very well tolerated.”

Patients in advanced stages of their disease with an unfavorable prognosis can benefit from Surefire treatments, Dr. Tack said. The treatments can significantly extend a person’s life span with good quality of life. The procedure can often be done with conscious sedation or general anesthesia, and the hospital stay is usually less than 24 hours.

“I feel great,” said Mrs. Foy, a mother of four who works as a purchasing agent and production manager for a ballet/leotard costume company. “I’m out of the hospital the next day, and I’m usually back to work a couple of days later. And I do everything … run a 10½-room house, shovel snow, and drive back and forth to work.”

Mrs. Foy said she wouldn’t hesitate to recommend the procedure to anyone who is in a similar position. “It’s keeping me alive,” she said. “The people at Stony Brook are so kind and gentle. They really care about their patients. And I’ve met many wonderful doctors at Stony Brook, and Dr. Tack is the best. I am so blessed.”