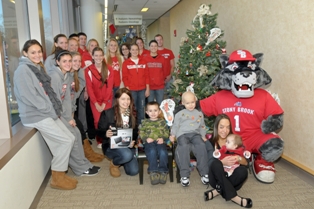 STONY BROOK, N.Y., December 21, 2012 – A group of Stony Brook University athletes set out to bring joy to pediatric patients being treated at the Stony Brook University Cancer Center. So they took on a holiday season mission to “stuff” an Athletics bus with toys of all kinds and deliver the donated items directly to the kids. A few days before Christmas they delivered more than 100 toys and gifts, such as dolls, board games, lego kits, coloring sets, footballs, and a box full of lacrosse sticks.

The pediatric patients, along with their siblings, beamed with delight when the unexpected delivery came. The moment was a welcome break from studies and training for the students, as they took in the joy of the children when placing the gifts under the Christmas tree in the playroom.

“For these kids to be able to pick a toy or two while in the midst of treatment is extra special for them and gets their mind off of treatments and having to be at the outpatient center around the holidays,” said Robert I. Parker, MD, Director of the Division of Pediatric Hematology/Oncology at Stony Brook Long Island Children’s Hospital.

Stony Brook Child Life specialist Lauren Sharaby said that the many toys will be distributed first within pediatric outpatient clinic at the Cancer Center and then as needed for patients at Stony Brook Long Island Children’s Hospital.

Chris Murray, Manager of Athletic Marketing at Stony Brook University, said that the athletes rallied to organize the holiday season toy drive. They collected donations from Athletics and many other University departments. They also received donations from fans who attended Stony Brook basketball games throughout the month of December. The group of athletes able to make the bus delivery represented a number of Stony Brook sports, including lacrosse, soccer, swimming and diving.