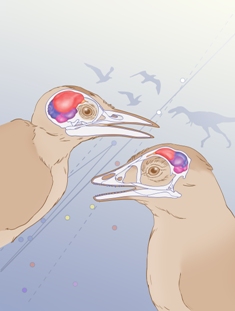 STONY BROOK, N.Y., July 31, 2013 – New research published in Nature and led by Amy Balanoff, a Research Instructor in the Department of Anatomical Sciences, Stony Brook University School of Medicine, provides evidence that dinosaurs evolved the brainpower necessary for flight well before they actually took to the air as birds. “Evolutionary origins of the avian brain” takes a comprehensive look at the so-called “bird brain.” Contrary to the cliché, the term describes a relatively enlarged brain that has the capacity required for flight and was present in one of the earliest known birds, Archaeopteryx.

“Archaeopteryx has always been set up as a uniquely transitional species between feathered dinosaurs and modern birds, a halfway point,” said Balanoff, also a research associate at the American Museum of Natural History. “But by studying the cranial volume of closely related dinosaurs, we learned that Archaeopteryx might not have been so special.”

The study reveals that at least a few non-avian dinosaurs had brains that were as large or larger than that of Archaeopteryx, indicating that some dinosaurs already suspected of possessing flight capability would have had the neurological hardwiring necessary for this behavior.

Birds can be distinguished from other living reptiles by their brains, which are enlarged compared to body size. This “hyperinflation,” most obvious in the forebrain, is important for providing the superior vision and coordination required to fly. But scientists are increasingly finding that features once considered exclusive to modern birds, such as feathers and the presence of wishbones, are now known to have first appeared in non-avian dinosaurs. Balanoff and colleagues provide more evidence to add the hyperinflated brain to that list.

The researchers used CT scanners at Stony Brook University, the University of Texas, Ohio University, and the American Museum of Natural History to peer inside the braincases of more than two dozen specimens, including modern birds, Archaeopteryx, and closely related non-avian dinosaurs like tyrannosaurs. By stitching together the CT scans, the scientists created 3-D reconstructions of the skulls’ interiors. In addition to calculating the total volume of each digital brain cast, the research team also determined the size of each brain’s major anatomical regions, including the olfactory bulbs, cerebrum, optic lobes, cerebellum, and brain stem.

A video of the CT images can be viewed here.

“If Archaeopteryx had a flight-ready brain, which is almost certainly the case given its morphology, then so did at least some other non-avian dinosaurs,” Balanoff explained.

The researchers also examined another factor that is important to flight in modern birds: a neurological structure called the wulst, which is used in information processing and motor control. The team identified an indentation in the digital brain cast of Archaeopteryx that might be homologous to the wulst seen in living birds. But this indentation is not found in non-avian dinosaurs that have bigger brains than Archaeopteryx, presenting the research team with a new question to explore in the future.

Funding for the research was provided, in part, by the National Science Foundation.