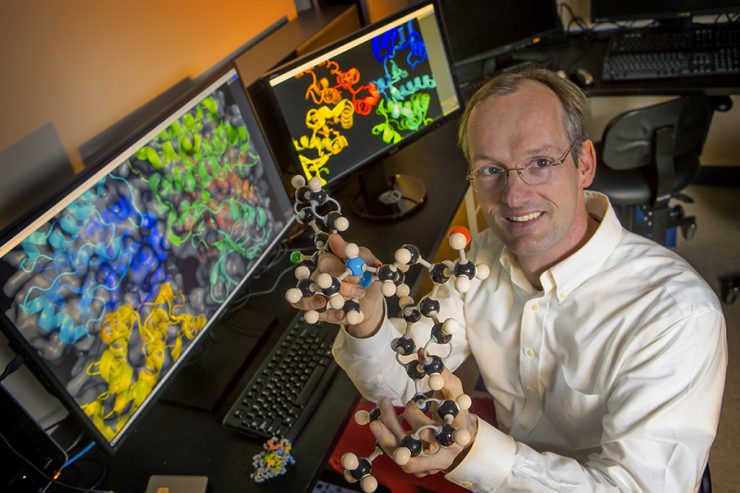 Much of the previous research with kinases involves grouping them based on how closely related they are to each other. This method, says Seeliger, somewhat resembles cataloging artworks alphabetically by artists and has had success – such as in the case of targeting a kinase to treat chronic myeloid leukemia. However, the method also has drawbacks. Seeliger and colleagues in the Laufer Center at Stony Brook University and researchers at Memorial Sloan Kettering Cancer Center grouped kinases by qualities related to their biological function. In particular, they grouped for the first time kinases by their response to drugs. This approach is more similar to arranging artworks by subject or artistic period as found in many museums, rather than alphabetically.

“We found that there are surprisingly huge differences among the kinases, as some are inhibited by only a few drugs and others by many. We can also demonstrate that a specific shape in these indiscriminate kinases enables them to be this way,” explained Seeliger. He believes that this novel method of grouping kinases creates a new view on the kinase family of drug targets and may help to build a poly-pharmacological approach to drug targeting kinases that could replace the current approach of kinase-targeting drugs that has drawbacks.

The research is supported in part by grants from the National Institutes of Health.

Stony Brook University, widely regarded as a SUNY flagship,  is going beyond the expectations of what today’s public universities can accomplish.  Since its founding in 1957, this young university has grown to become one of only four University Center campuses in the State University of New York (SUNY) system with more than 25,700 students and 2,500 faculty members, and 18 NCAA Division I athletic programs. Our faculty have earned numerous prestigious awards, including the Nobel Prize, Pulitzer Prize, Indianapolis Prize for animal conservation, Abel Prize and the inaugural Breakthrough Prize in Mathematics. The University offers students an elite education with an outstanding return on investment: U.S.News & World Report ranks Stony Brook among the top 50 public universities in the nation. Its membership in the Association of American Universities (AAU) places Stony Brook among the top 62 research institutions in North America. As part of the management team of Brookhaven National Laboratory, the University joins a prestigious group of universities that have a role in running federal R&D labs. Stony Brook University is a driving force in the region’s economy, generating nearly 60,000 jobs and an annual economic impact of $6.4 billion. Our state, country and world demand ambitious ideas, imaginative solutions and exceptional leadership to forge a better future for all. The students, alumni, researchers and faculty of Stony Brook University are prepared to meet this challenge.