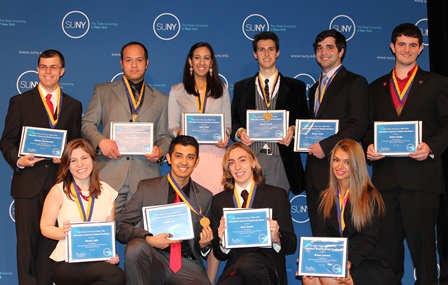 Fourteen students from Stony Brook University received the Chancellor’s Award for Student Excellence in a ceremony at the Empire State Plaza Convention Center in Albany on April 2. SUNY Chancellor Nancy L. Zimpher presented the awards to a total of 256 SUNY students.

“It is my highest honor to recognize the achievements of SUNY students who have excelled not only academically but as leaders on their campuses and in their communities,” said Chancellor Zimpher. “Students receiving this award are to be commended for their excellence as role models, artists, scholar athletes and civic volunteers. Their leadership can serve as an inspiration to all SUNY students and a tremendous point of pride for the entire SUNY family. Congratulations to all of the students receiving the 2015 award.”

Each year, campus presidents establish a selection committee that reviews exemplary students. Nominees are then forwarded to the Chancellor’s Office and are subject to a second round of review. Finalists are then recommended to the Chancellor to become recipients of the award. Each recipient receives a framed certificate and medallion, which is traditionally worn at commencement.