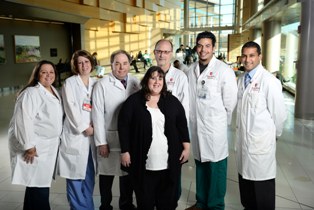 Fast action by physicians gives preschool teacher back her life Dr. Tack: “This is a miracle. I’ve seen 10 miracles in my life, and this ranks as number two.”


STONY BROOK, N.Y., December 13, 2012 — One warm August day, Carin Navratil, a 22-year-old preschool teacher, was supposed to be getting ready to attend to her young students. Instead, she ended up being brought back to life six times in the Emergency Department at Stony Brook University Hospital. Now she is giving back to the institution that saved her life as a volunteer who helps others in need.

Ms. Navratil woke up that August morning feeling weak and short of breath. When she tried to get up, she collapsed. Her parents called 911, and Ms. Navratil was taken to Stony Brook University Hospital. She “coded” in the ambulance – the term doctors use to describe a situation in which immediate lifesaving action is required – and was brought to the Hospital without vital signs.

The emergency team suspected one or more blood clots had gotten into Ms. Navratil’s lungs, causing her to lose lung and heart function. Their goal was to stabilize Ms. Navratil long enough so that she could undergo an emergency procedure to dissolve the clots.

Finally, Ms. Navratil was moved to Interventional Radiology (IR). As the team was in the process of taking her to the area where the procedure was to be performed, she coded for a sixth time, and again needed to be resuscitated.


“I was fairly certain she wasn’t going to make it,” said Dr. Viccellio, Clinical Director of the Emergency Department. “It’s really a miracle that she did.”

“Miracle” is the same word used by Carl Tack, MD, an interventional radiologist in the Department of Radiology and the physician who performed the lifesaving procedure. A balloon was first inflated in the pulmonary artery creating a channel of blood flow. Next, Angiojet was used to remove a small amount of clot. After the Angiojet, Ms. Navratil’s blood pressure stabilized. Finally a thrombolytic infusion of TPA was begun which removed almost the entire clot over a 24-hour period. The next day, an IVC filter was put in place to prevent this from happening again.

Following the procedure, Ms. Navratil was sent to the Medical Intensive Care Unit, where she spent a month in a coma, surrounded day and night by her parents, Susan and Jerry, her older sister Nicole, brother-in-law Scott and other family members. Rajeev Patel, MD, and Daniel Lozeau, MD, were her physicians during this time.

Ms. Navratil’s mother, Susan, recalls her ordeal, “It’s horrible for any parent to have to go through. I talked constantly to Carin while she was in her coma, reading her cards and poems, anything to try to reach her.”

After showing some progress, Ms. Navratil was transferred to the Hospital’s Respiratory Care Unit, where she stayed another month. A team of nurses as well as occupational and physical therapists cared for and worked with Ms. Navratil to help her recover and regain her physical strength. Ms. Navratil had also become legally blind from the loss of oxygen, which was caused by the combination of the clot in her lung and her heart stopping, but her vision was slowly improving.

Ms. Navratil’s mother was very grateful for the attentive care her daughter received. “Drs. Tack and Viccellio came to visit her in the hospital. Those two doctors were amazing. And the hospital staff was wonderful and so thoughtful in the way they treated us.”

Ms. Navratil then moved to a rehabilitation center for another month to learn how to walk again. There she was surprised with separate visits from Stacy Heuschneider, RN, and Ed Mann, RN, two of the nurses from Stony Brook’s respiratory unit who cared for her. She finally went home in November 2010.


Today, Ms. Navratil is 24 years old and living with her parents in Farmingville. Her vision continues to improve. A permanent filter implanted in Ms. Navratil’s vena cava (a large vein that delivers blood to the heart) by Dr. Tack helps to ensure that a clot will not travel to her lungs again.

“I think it’s really important to celebrate this case,” said Dr. Tack. “This is a miracle. I’ve seen 10 miracles in my life, and this ranks as number two. Considering everything she went through, she’s a total success.”

Susan Navratil is still very emotional when talking about her daughter’s miraculous recovery. “Carin keeps my spirit up. She was very strong through it all. I look at her as my inspiration.”

Ms. Navratil is in turn thankful for the support of her parents, “My mom and dad were by my side throughout it all and gave me the strength to survive.”

Although she has not yet returned to a full-time job, Ms. Navratil, with the encouragement of Stacy Heuschneider, became a volunteer for the Hospital’s respiratory unit where she works two days a week. Her duties include making copies, stocking supply shelves, and assisting at the nurses’ station. She is also in training to become a transporter at the Hospital.

Ms. Navratil recently spent time meeting with student nurses to discuss her experience as a patient. She stressed the importance of the care given to patients and their families and to be mindful of how patients and families are treated.

“I am so grateful to all the staff who saved my life and took such great care of me,” Ms. Navratil said. “I wanted to give back to Stony Brook, because without their care and support, I wouldn’t be here.”