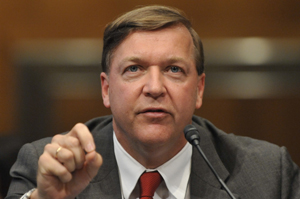 STONY BROOK, NY, August 24, 2012 – Stony Brook University President, Samuel L. Stanley Jr., M.D., has been appointed Chair of the National Science Advisory Board for Biosecurity (NSABB), a group of 25 experts who advise the Secretary of Health and Human Services, the Director of the National Institutes of Health and the heads of all Federal departments and agencies that conduct or support life sciences research. It is responsible for making recommendations concerning strategies for the efficient and effective oversight of federally conducted or supported dual-use biological research, taking into consideration national security concerns and the needs of the research community.

“Dr. Stanley brings tremendous experience to the position, both as an institutional leader, and as a nationally respected scientist,” said Dr. Amy Patterson, director of the NIH Office of Science Policy, which manages the NSABB. “He is also known for his thoughtful, statesman-like leadership and even-handed approach to tackling complex issues – characteristics that will serve him well as he takes the helm of the NSABB. The NIH is grateful to Dr. Stanley for taking on this important commitment,” she added.

As one of the top-funded biomedical and infectious disease researchers in the country during his tenure at Washington University in St. Louis, and during the past three years as President of Stony Brook University, Dr. Stanley has on a number of occasions been invited to sit on national advisory boards, including a recently-concluded four-year appointment to the NIH National Advisory Allergy & Infectious Diseases Council. In 2006, he was invited to participate in an NSABB roundtable to provide expert advice on developing criteria to define dual use research.  From 2008 to 2010, he was a member of the US Department of Commerce, Emerging Technology and Research Advisory Committee. In 2011 he was invited to serve on the National Security Higher Education Advisory Board.

“Dr. Stanley’s expertise in infectious disease will help him to inform the NIH about protecting against emerging agents and improving biosecurity in our nation,” said Congressman Tim Bishop. “We are fortunate to have his expertise and leadership at Stony Brook University, one of New York’s top research universities, and I am pleased that his experience will also serve our nation in this critically important capacity.”

“I appreciate the opportunity and the confidence that has been shown me with this appointment, and I am honored to serve my country in this role,” said President Stanley. “The NSABB is an important committee charged with reflecting a diversity of viewpoints; it is supported by a terrific staff. As a nation, we now face and will continue to face extraordinarily complex issues and as a committee we will approach these issues in a reasoned and logical manner to keep scientific communication strong — without losing sight of national security issues.”


In July 2009, Samuel L. Stanley Jr., M.D. became the fifth president of Stony Brook University, often referred to as a flagship of the State University of New York (SUNY) system and one of just 61 members of the Association of American Universities (AAU). Stony Brook is recognized for its innovative programs, groundbreaking discoveries, student diversity and integration of research with undergraduate education. In addition to his position as University President, Dr.  Stanley serves as the Vice Chairman of Brookhaven Science Associates (BSA), an organization that manages Brookhaven National Laboratory for the U.S. Department of Energy (DOE) Office of Science. Among his most significant accomplishments during his first three years at Stony Brook, Dr. Stanley has overseen the successful establishment two major research institutes: The Laufer Center for Physical and Quantitative Biology, and the Institute for Advanced Computational Sciences.

Prior to his appointment at Stony Brook, Dr. Stanley served 25 years as a physician-scientist and educator and Vice Chancellor for Research at Washington University in St. Louis. During his time as a biomedical researcher and Vice Chancellor for Research at Washington University, Dr. Stanley distinguished himself as one of the top recipients of support from the National Institutes of Health (NIH) for his research focusing on enhanced defense against emerging infectious diseases. He is an expert in the biological mechanisms that cells employ when responding to infectious agents such as parasites, bacteria, and viruses, a process commonly called the inflammatory response.