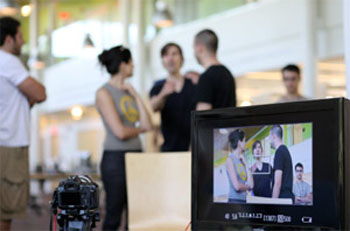 Successful applicants for this summer’s program, which overlaps the two sessions (July 10-14, July 17-28) of Southampton Arts Summer MFA workshops in all the disciplines of creative writing and literature and in theatre, were recruited from the ranks of experienced filmmakers, promising amateurs, and artists with expertise in another genre interested in narrative shorts, webisodes, documentaries, dramas and comedies, and commercial and experimental films.

The primary requirement for admission, Reeves said, was having “something to say, the desire to say it visually, and the willingness to work around the clock for 20 days to do so.”

As organized by Magdalene Brandeis, a producer, novelist, teacher and director of Manhattan Programming for Stony Brook Southampton, the 20/20/20 program breaks down roughly into thirds: after the filmmakers have been grouped into three cohorts based on level of experience, they will be taken through a three-phase boot camp while being bombarded with vital information filmmakers today need to know.

In Pre-production, they will develop their screenplays into storyboards, secure locations and props, and cast from a pool of professional actors with the help of an experienced casting director.

In Production, in addition to directing their own films, they will learn other aspects of the filmmaking process by crewing on classmates’ films.

Finally, in Post-production, the filmmakers will edit, mix and score their films. Throughout the process, they will have access to state-of-the-art equipment, including Canon digital cameras and Final Cut Pro editing tools, and master classes organized by Vachon and Koffler with invited guests who will share insights about all aspects of independent film today, including: business and financing, getting a film made, marketing and distribution, and the role of festivals.

The program culminates in the 20/20/20 Film Festival, before an audience that includes Christine Vachon and the Killer Films team.

“With this program,” Reeves said, we hope to expand Christine’s vision for the future of film, which is ‘platform agnostic.’ Filmmakers will remain invested in their stories, but less invested in how those stories reach an audience, whether large or small screen, long or short form.”

“Actually, this new film program fits perfectly with what we’re doing in all creative disciplines,” he continued. “Despite radical changes in the business of art, fiction writers, poets, playwrights, memoirists, actors, visual artists all have similar goals: They want to find their voice, to tell a story or express an idea, and to reach an audience. We help them do that.”