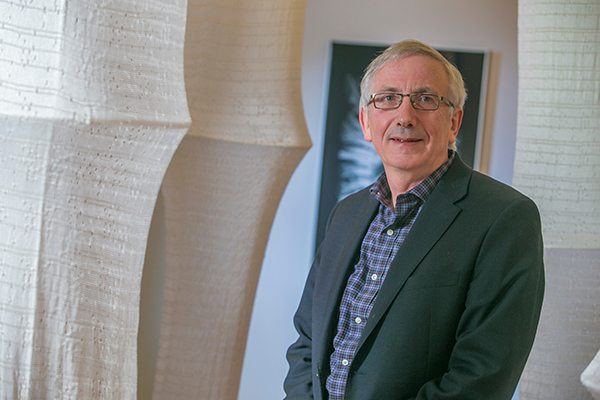 STONY BROOK, NY, February 4, 2020 – Sir Simon Donaldson, a permanent member of the Simons Center for Geometry and Physics (SCGP) and a professor in the Department of Mathematics in the College of Arts and Sciences at Stony Brook University, has been awarded  the 2020 Wolf Prize in Mathematics for his contribution to differential geometry and topology. Professor Donaldson is jointly awarded the prize with Professor Yakov Eliashberg, Stanford University and Chairman of the Board of Trustees of the SCGP, for their outstanding contributions to mathematics throughout many years.

Professor Donaldson’s work has been a unique combination of novel ideas in global non-linear analysis, topology, algebraic geometry, and theoretical physics, following his fundamental work on 4-manifolds and gauge theory. Especially remarkable is his recent work on symplectic and Kähler geometry.

“A dedicated mentor and extraordinary scientist, Sir Simon Donaldson personifies excellence at Stony Brook University,” said Michael Bernstein, Interim President of Stony Brook University.  “We are tremendously proud of his impact in the field of Geometry, in both the Stony Brook Department of Mathematics and the Simons Center for Geometry and Physics.”

Professor Donaldson has achieved many other significant accomplishments, such as the Fields Medal in 1986 for his work in the geometry and topology of 4-dimensional manifolds, and the Crafoord Prize in Mathematics in 1994. In 2009, he was awarded the Nemmers Prize for his work in mathematical theories linked to physics and the Shaw Prize in Mathematical Sciences for his contributions to geometry. Donaldson was elected to become a member of several prestigious groups, such as the Royal Swedish Academy of Sciences, a Fellow of the American Mathematical Society, and the US National Academy of Sciences. In 2014, Donaldson was one of five to receive the Breakthrough Prize in Mathematics, founded by Facebook founder, Mark Zuckerberg, and Digital Sky Technologies founder, Yuri Milner.

The Wolf Foundation is a unique and highly prestigious Israeli foundation that both celebrates and promotes exceptional achievements in the Sciences and the Arts worldwide. This is the 42nd year that the acclaimed Wolf Prize will be awarded to outstanding scientists and artists from around the world for achievements in the interest of mankind and friendly relations among individuals, regardless of race, religion, nationality, gender or political views and is a source of worldwide pride. The scientific prizes are awarded in the fields of medicine, agriculture, mathematics, chemistry and physics and are selected by international juries, consisting of world-renowned professionals in their field, that are reappointed every year.

Since the Foundation was established, 345 scientists and artists have won Wolf Prizes and approximately one-third of the Wolf Prize laureates ultimately received the Nobel Prize in areas shared by the two prizes.

The 2020 prizes will be awarded to nine laureates from six countries, including the U.S., England, France, Russia, Spain and Israel. The awards ceremony will take place in Jerusalem in June 2020.  For more information, please click here.

Stony Brook University, widely regarded as a SUNY flagship, is going beyond the expectations of what today’s public universities can accomplish. Since its founding in 1957, this young university has grown to become one of only four University Center campuses in the State University of New York (SUNY) system with over 26,000 students, more than 2,700 faculty members and 18 NCAA Division I athletic programs. Our faculty have earned numerous prestigious awards, including the Nobel Prize, Pulitzer Prize, Indianapolis Prize for animal conservation, Abel Prize and the inaugural Breakthrough Prize in Mathematics. The University offers students an elite education with an outstanding return on investment: U.S.News & World Report ranks Stony Brook among the top 40 public universities in the nation. Its membership in the Association of American Universities (AAU) places Stony Brook among the top 65 research institutions in North America. As part of the management team of Brookhaven National Laboratory, the University joins a prestigious group of universities that have a role in running federal R&D labs. Stony Brook University fuels Long island’s economic growth. Its impact on the Long island economy amounts to $7.38 billion in increased output. Our state, country and world demand ambitious ideas, imaginative solutions and exceptional leadership to forge a better future for all. The students, alumni, researchers and faculty of Stony Brook University are prepared to meet this challenge.