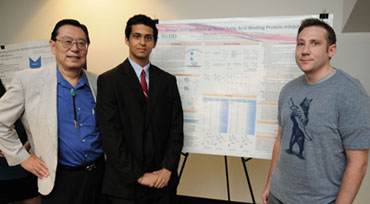 Raghav Tripathi (center), a $10,000 scholarship winner at the Siemens Competition National Finals, is pictured with his mentor SBU Distinguished Professor Iwao Ojima (left), and PhD candidate William Berger, who assisted him with his project.

STONY BROOK, NY, December 4, 2012 – Raghav Tripathi, a high school student from Oregon who conducted research at the Simons Summer Research Program at Stony Brook University under the tutelage of Distinguished Professor Iwao Ojima, PhD, earned a $10,000 scholarship with a sixth place finish in the individual category of the 2012 Siemens Competition National Finals in Washington, D.C.

Tripathi’s “painless painkiller” project,
Design and Synthesis of Novel Fatty Acid Binding Protein Inhibitors
, began as an idea after his mother broke her leg in a skiing accident and refused to take pain medication because of the side effects. As a result, Tripathi applied and was accepted to conduct his research with Professor Ojima, Distinguished Professor in the Department of Chemistry and Director of the Institute of Chemical Biology and Drug Discovery (ICB&DD) at Stony Brook University. “Raghav showed great initiative. This was displayed even when he applied to do research in my laboratory, since he resides, literally, on the other side of the United States,” said Professor Ojima. “His thirst for knowledge seems insatiable, and he masters every challenge with exceptional speed. He’s extremely creative, focused, determined and persevering.”

This multi-disciplinary research project, seeking to discover a novel form of pain medication with minimal side effects, was conducted under the guidance of Professor Ojima and a team of collaborators from the departments of Biochemistry and Cell Biology, Applied Mathematics and Statistics and Chemistry.

“Professor Ojima’s innovative applications of chemical synthesis and biological assays to medical advances were strongly aligned with my fascination with medical research,” said Tripathi. “Through my research and under the guidance of my mentors, I worked on optimizing a compound that the lab is developing which has the potential to decrease pain through increasing concentrations of the body’s natural painkilling molecule.”

Professor Ojima demonstrated the methods that he uses on cancer and tuberculosis research for Tripathi to apply to his own project. Tripathi created the drug and tested it on human cells and enzymes. “This is an extremely promising project, at the cutting-edge of multidisciplinary research at the biomedical interface,” said Professor Ojima. “Test results so far have been consistent with the predictions of our computer models that this technology may have multiple medicinal applications, including novel anti-inflammatory drugs and analgesics. Of particular interest is the potential to relieve pain with a non-addictive compound that mimics the body’s own pain mitigating mechanisms. This has enormous implications not only in medical practice, but also in reducing the problems of drug dependency and abuse in our society.”

Back home in Oregon, Tripathi founded and serves as president of the Westview High School Pre-Medical Association, the largest high school pre-med society in Oregon, is captain of the speech and debate teams and plays varsity tennis. He won first place for “Best in Category” in Cellular and Molecular Biology at the 2012 Intel International Science and Engineering Fair. He aspires to one day become a neurologist.

Professor Ojima has mentored numerous semifinalists, regional finalists, finalists and winners in the nation’s largest high school science competitions. In 2007, he mentored the Siemens Competition grand prize winners (team category), Janelle Schlossberger and Amanda Marinoff, who at the time were both seniors at John F. Kennedy High School in Plainview-Old Bethpage. They shared a $100,000 scholarship for their project FtsZ Inhibitors as Novel Chemotherapeutic Agents for Drug Resistant Tuberculosis.