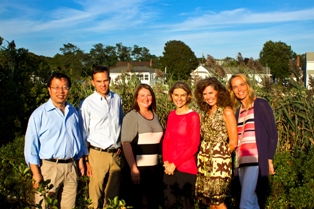 Stony Brook, NY., September 25, 2013 –More than 50 friends of Stony Brook University’s School of Marine and Atmospheric Sciences (SoMAS) took part in the first annual “Clams for Clams” fundraiser on September 7 to support its Shinnecock Bay Restoration Program (ShiRP), launched with a $3 million gift in 2012 from the Laurie Landeau Foundation and the Simons Foundation.

Proceeds from the event will develop five new clam spawner sanctuaries in the Bay, which have been proven to increase water quality and control harmful algae while strengthening the clam population.

Event co-chairs Roz and Richard Edelman, and Maureen Sherry and Steve Klinsky, both of Southampton, NY, hosted the event at Stony Brook’s new Marine Sciences Center at the University’s Southampton campus, raising more than $55,000 in tickets and sponsorships to fund five spawner sanctuaries.

“The water here is like nowhere else, whether you like to simply look at it, paint it, play in it, or make your living fishing it,” said Maureen Sherry Klinsky who with her husband Steve funded two clam spawner sanctuaries. “I don’t want to look out across Shinnecock Bay 20 years from now, the tipping point, and wish I’d done something.”

Research by Stony Brook’s School of Marine and Atmospheric Sciences faculty shows that increasing the clam population in Shinnecock Bay can reinvigorate this fragile ecosystem.  What makes the ShiRP project unique is its emphasis on collaboration among all stakeholders: area residents, Southampton Town Trustees, local fishermen and even other community non-profits. In fact, the Peconic Baykeeper also donated a clam spawner sanctuary at the fundraiser.

“The study of marine and atmospheric sciences is vitally important if we as a society are to find viable solutions,” said SoMAS Dean Minghua Zhang. “We have to be dedicated to taking action to solve some of the world’s most pressing problems.”

“It’s more evident now than ever before that friends of Stony Brook care about our community and about the future of the Bay,” said Dexter A. Bailey, Jr., Vice President of University Advancement. “We are so grateful to everyone who showed their support for this unique cause.”

Guests enjoyed a cocktail reception and sunset cruise overlooking the Bay, in addition to a tour of Stony Brook’s new Marine Sciences Center, which will support the growth of the SoMAS undergraduate marine science and environmental science programs, and play a key role in their ability to perform groundbreaking research into a variety of issues facing Long Island and the world today.

“The event was a great success and hopefully it is the first of several,” said Bradley Peterson, SoMAS Associate Professor and one of the Shinnecock Bay Restoration Program (ShiRP) researchers.

“A number of people voiced their surprise about how clams can help with the Bay’s restoration, and left excited about how the clam sanctuaries will improve water quality in western Shinnecock Bay.”

In response to deteriorating conditions in Shinnecock Bay on Long Island, the School of Marine and Atmospheric Sciences (SoMAS) at Stony Brook University and its Institute for Ocean Conservation Science founded the Shinnecock Bay Restoration Program (ShiRP) to restore the health of this vital ecosystem. The goal of ShiRP is to use science, outreach, and partnerships to restore the water quality and fisheries of Shinnecock Bay.

Scientists and students are aiming to reduce the occurrence of harmful algal blooms and increase shellfish populations, ultimately to restore the nutrient balance and enrich the diversity of plants and animals living in the bay. By performing a baseline survey of the current state of the bay, and then working to replenish shellfish and eelgrass beds, the ShiRP team hopes to return Shinnecock Bay to a thriving estuarine environment.

In 2012, the Laurie Landeau Foundation matched by a gift from the Simons Foundation donated $3 million for the program to Stony Brook’s School of Marine and Atmospheric Sciences (SoMAS) who will use the funds to restock shellfish, expand existing eelgrass beds, harvest seaweeds to absorb nutrients and inhibit harmful algal blooms, monitor restoration efforts and share the project’s goals and results with stakeholders and the public.