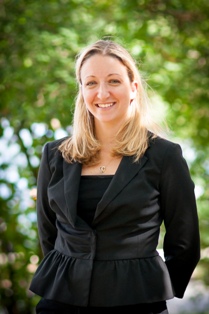 
STONY BROOK, NY, September 18, 2013 — After a three-month national search, Shayna Stahl has been appointed as the new Director of Athletic Bands at Stony Brook University, a position left vacant by the retirement of the founding director and legendary Long Island music educator, Mr. John J. Leddy.

Stahl assumes this position after a long and successful tenure as Stony Brook’s part-time Assistant Director of Athletic Bands. She has been working with the band since its inception in 2006 when she first began as a graduate assistant and was quickly promoted in 2008 to Assistant Director. In this role she has been responsible for and assisted with, among other things: the design and instruction of marching drill, visual elements and field shows; the direction of the pep band; the facilitation of leadership development programs; and the coordination of travel.

“To say that this was a diverse and talented pool of candidates is an understatement,” said Assistant Dean of Students, Jeffrey A. Barnett, who oversees the Office of Athletic Bands. “At the end of the day, and having searched all across the country, we found our future right here at home at Stony Brook with Shayna Stahl. Her imprint is all over this program and she is responsible for a great deal of the success the program has garnered in its short history. Shayna has the perfect combination of experience to suit our program. And she shares the important values of student-centeredness, community, tradition and excellence that will both maintain our identity and help bring the band to the next level, commensurate with some of the outstanding bands of the CAA. I am confident that the band will continue to experience great success under her leadership.”

Since 2006, Stahl has served in a full time position as an acclaimed and tenured music educator in the Middle Country School district. In this role she served as Director of Bands, taught music theory and was responsible for the direction of the Newfield High School Wind and Jazz Ensembles, and Concert and Marching Bands. Stahl led these programs to high praise and award winning success. She has served as choreographer for student musicals as well as dance instructor for South Huntington Summer Arts School. In addition to her music responsibilities, Stahl was promoted to and served as Administrative Dean for the 10th and 11th grades where she helped to develop a caring and supportive community while responding to student needs, crises and concerns.

Stahl has garnered many awards and much recognition over her near decade of experience. She is the recipient of the 2011 Conducting Study Grant, awarded by the College Band Director National Association to help advance gender equity in the field of music education and conducting. Mrs. Stahl’s High School bands consistently earn “superior” rankings (Level 6) by the New York State School Music Association and many of her students and programs are often featured on various media outlets for their achievements. She has been invited to serve as a guest conductor for the Huntington Community Band, where she has performed for many years. Stahl is also quite the talented musician in her own right and has performed with the Atlantic Wind Symphony and Suffolk Horn Club. Stahl has strong ties to the Long Island Music Educator Community and is also affiliated with the Collegiate Band Director’s National Association, New York State School Music Association (NYSSMA), Suffolk County Music Educator Association (SCMEA), New York State Band Director Associations and New York State Music Association.

Stahl earned her Bachelor’s Degree in Music Education from Temple University, where she was a four year marcher with the Diamond Marching Band and served as Drum Major for two years. She has a Master’s Degree in Liberal Studies from Stony Brook University. Her zest for learning has motivated her to also pursue her nearly completed second Master’s Degree in Music Education with a specialization in Conducting at the University of Hartford’s Hartt School of Music, one of the top graduate music programs in the country. She is simultaneously enrolled in a post-graduate certificate program in Educational Leadership at Stony Brook University’s School of Professional Development.

“Shayna Stahl’s impressive credentials, diverse talents as well as her significant and demonstrated experience as an educational administrator and music educator are indeed impressive and I am confident and excited about the future of the band,” said Dr. Jerrold L. Stein, Associate Vice President of Student Affairs and Dean of Students.

Founding Director, John Leddy, said “The work Shayna has done and the influence she has had on the performance and direction of the band is enormous.  I would never have succeeded in this position and the band would not be what it is without her able assistance.  Mrs. Stahl brings a rich and deep knowledge of college athletic band programs and is a talented educator.  Her extraordinary dedication to the program has been a great influence and inspiration. She brings the entire skill set needed to guide the program well into the future.”

In being appointed to this position, Mrs. Stahl become one of only a small handful of women to lead a Division-I collegiate marching/athletics band program, joining with directors at the University of New Hampshire, University of Delaware, Bowling Green University and Mississippi State University.

Remarks from Shayna Stahl on her hiring:

“I am thrilled and honored to be selected as the new Director of Athletic Bands here at Stony Brook University and to have been a part of the program from the beginning. The sense of community and school spirit at Stony Brook is infectious and I know the direct role the band has played helping to instill university pride and traditions.  It is a pleasure be able to work closely with students who love band, love their school, and love to learn and are as talented and smart as they are. I see my role as building upon these important qualities and providing students with the guidance, support, knowledge, and professionalism that will assist in taking us to the next level.”

About the Spirit of Stony Brook Marching Band

Founded only 7 years ago, the Office of Athletic Bands now includes 200 talented students from across the country and around the world. The program is one of only five collegiate marching bands in the State of New York and the program is one of the most well known in the New York Metropolitan area. The geographic proximity to New York City has allowed the program to enjoy access to commercial success, with the bands having been featured on ABC’s Extreme Home Makeover, New York and Arkansas Lottery Commercials, Disney PIXAR’s launch of Monster’s University and the New York Columbus Day Parade. The Office of Athletic Band is situated within the Division of Students Affairs, reports to the Assistant Dean of Students, and maintains valuable partnerships with the Departments of Music and Athletics.