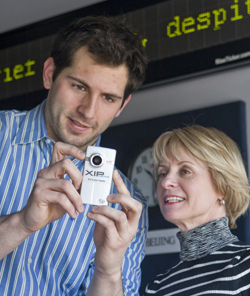 “Our students are very excited to be part of this program,” said Marcy McGinnis, Associate Dean, School of Journalism at Stony Brook University. “This will allow our students to put their newsgathering and producing skills to the test and give them the opportunity to see their work on a professional television broadcast or Web site.”

“I think this is a great idea. Journalism is everywhere and you never know when you might bump into something newsworthy,” said journalism student, Jessica A. Laforest. “Having these cameras with us 24/7 allows us to function as reporters anytime, anywhere.”

Founded in 1948 and owned by Tribune Broadcasting, a division of the Tribune Company, WPIX-TV has long been regarded as a groundbreaking station in New York. In September 2006, WPIX becamethe flagship station of the CW Television Network, and its successful primetime programming, award winning news, extensive library of hit movies, first-run programs, off-network sitcom favorites, quality children’s programming and public affairs shows, as well as outstanding event coverage, have contributed to the station’s success. WPIX has earned nearly 170 Emmy Awards, including two Emmy Awards for Outstanding Morning News Program and multiple Emmy Awards for Outstanding Newscast.  The station has been honored with numerous other awards for excellence in reporting, news coverage, public affairs, specials and features. In addition, the WPIX has been the official broadcast television home of the New York Mets since 1999.  For more information, please visit wpix.com.

Part of the State University of New York system, Stony Brook University encompasses 200 buildings on 1,600 acres. In the 50 years since its founding, the University has grown tremendously, now with nearly 24,000 students and 2,100 faculty, and is recognized as one of the nation’s important centers of learning and scholarship. It is a member of the prestigious Association of American Universities, and ranks among the top 100 national universities in America and among the top 50 public national universities in the country according to the 2008 U.S. News & World Report survey. Considered one of the “flagship” campuses in the SUNY system, Stony Brook University is a driving force of the Long Island economy, with an annual economic impact of $4.65 billion, generating nearly 60,000 jobs. Stony Brook accounts for nearly 4% of all economic activity in Nassau and Suffolk counties, and roughly 7.5 percent of total jobs in Suffolk County. The School of Journalism is the first and only undergraduate school of journalism in New York State’s public university system. Classes are instructed by world-class faculty, many who were among the best in the industry and some who still work in journalism jobs. They bring real-world experience to the classroom.